Late leaving Calgary I was re-directed from Toronto to London and then Dublin, arriving at about 3:00 pm, four hours late.  A taxi dropped me off at my warm showers host at a little after 4:00.   Eoin (pronounced Owen) is a 39 year old student who luckily had spent time as a bike mechanic.  My derailleur extender was broken in transport. Eoin spent a couple hour fabricating a fix.  It was about 8:00 by the time we pronounced the bike as good as can be and off we went for pizza.

I cycled into central Dublin to test the bike and to pick up a small Ireland road atlas. The bike was fine for now, but to cover me Eoin found an extender on Amazon and had it delivered to a bike shop near Cork.  About noon I said my goodbyes and followed Eoin’s directions to get out of town heading south into the Wicklow hills.  It was mostly painted bike trails in Dublin but once clear of the city onto the R roads I was sharing the two lane road with fairly heavy traffic.  The riding was fine as the traffic is fairly slow.  About half way out I moved onto a quieter road suggested by Eoin.  It was more hard work as the quiet roads may be even steeper than the R roads.  I pushed up one hill.

I had a bowl of soup and bread at Roundwood and then on into Laragh.  I had no reservation and was considering tucking into the woods in my tent but the wind was up and the rain coming in.  I checked into the local hotel and talked them down to 75 Euro.

From Laragh it is 3 km up to the old monastery at Glendalough.  I had a nice 5 km walk around the ruins and cemetery and then on up to the lough (lake) itself.  There is a nice round tower here, an integral part of the monk’s defence from Viking attack.  Glendalough was attacked four times; I don’t know how effective their defence was.  I took some nice pictures of a Grey Heron in the river flowing out of the lough. 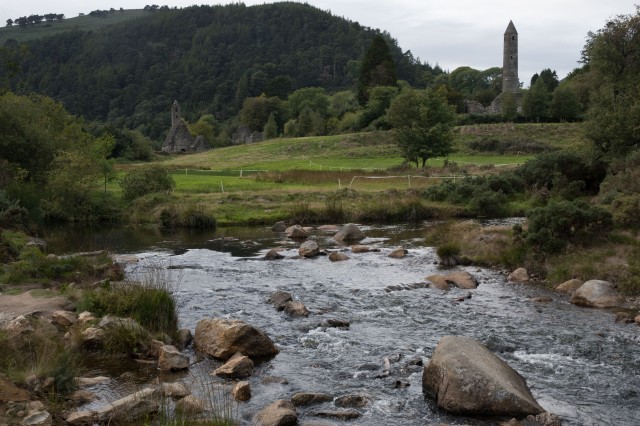 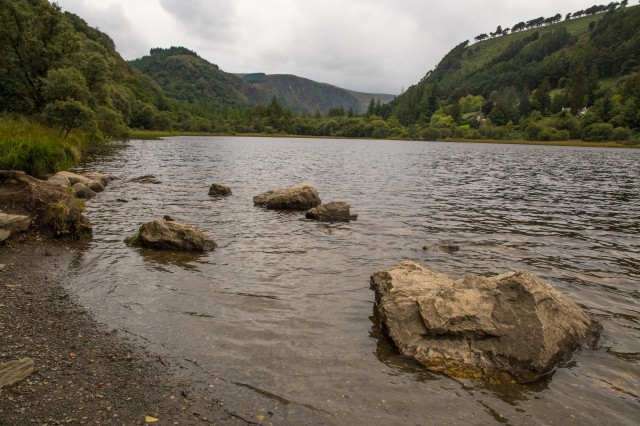 The weather, my hotel meals, dinner and breakfast, and stay have convinced me that I won’t be tenting much until things improve.

That sentiment was reinforced in the morning when I suited up in my rain gear and stepped into a steady drizzle.  The ride south was wonderful.  Deep forest and serpentine roads with very few cars.  I was worrying a bit about hills but my bike seemed to handle them fine.  Through Rathdrum and on towards Aughrim.  My target was Kilkenny.  I had picked a route through to the SW coast in part based upon the regions where I could create a route out of small roads.

As I was whizzing down one of the continuous hills I passed what I will call a gypsy wagon. Four little people sitting abreast on the bench of a covered wagon pulled by a single horse.  I was going too fast to stop for a picture but my wave was returned by all four.

And then my bike gave up.  As I was shifting gears they screeched loudly, my rear wheel seized and I abruptly came to rest.  The makeshift extender had bent turning the derailleur into the wheel.  Nothing on the wheel seemed to be damaged but the derailleur was toast, and nothing I could do would work.  After fussing a bit I started to walk.  I was hoping for a bus but as I had yet to see one knew this was unlikely.  A road sign indicated that I was still 10 km from Aughrim.  I began sitting on the bike and pushing with one foot, and I lucked onto a few down hills.  I guess it took an hour and a half to get into town, but there was no bike shop.

A small town bike shop wouldn’t be much help getting a fix, but I thought they might help get me riding, so now I found a sheltered spot and began trying to do it myself.  The idea was to take out some chain links in effect making a one speed bike.  I had just broken the chain, removed the links to get to the length I wanted and was struggling to put it together when the couple whose driveway I was using came out to see what was up.

I guess I didn’t look very adept as they suggested that they could drive me into a bike shop.  No arm twisting was necessary and so we went into their house, had some tea and began phoning bike shops.  The fourth one we called figured they would be able to help.  So off we went.

Fifteen minutes later the bike guy had dug around in his stuff and found everything we would need, including the bike extender.  I walked down to the closest hotel, negotiated a 110 E stay on this busy Friday night and two hours later and another 300E poorer I had a newly tuned bike.  Big money, but no effective time lost.  Gorey was off of my initial route and so now I created a new one.

Having dug pretty deeply into my funds with expensive hotels and my bike repair I thought I had better make some advance bookings.  My new route would head towards the Viking cities of Wexford and Waterford.  I made a reservation at Duncannon and would ride fairly busy R roads to get there.

After a big breakfast that is a part of all accommodation here and an hour and a half on the busy R road I had a nice coffee break and a warm up.  An then an hour later a 2 km detour got me to the Wexford Wildfowl reserve.  The mud flats along the coast where the reserve is are interestingly called slops.  Notable for geese I saw Greylags and Barnacles.  I also saw a lovely little European Robin, which keeps popping up on this ride.

I rode through the middle of Wexford, stopping only to get a record keeping picture, and then on to Wellingtonbridge for soup and bread that is becoming my lunch break meal of choice.  Duncannon is across the bay from Waterford and my B&B was 45E.

I’m still not getting away very early as the weather is so poor.  I had a 5 km ride to a ferry and then another 15 km into the centre of Waterford.  Both legs had a good climb.  Waterford sits up the bay where the Barrow River empties into the sea.  No doubt a well-protected harbour for the Vikings who ended up creating Ireland’s first town here.  There is a group of museums in a cluster called The Viking triangle, but I was headed to the Waterford Greenway.  It was Sunday and the sun had finally revealed itself.

The Waterford Greenway is a destination rails-to-trails conversion.  It is 47 km long, there are bike rental outlets at the two ends, Waterford and Dungarvan and at places along the way.  Not only was the sun shining but the wind was down and of course the normal rolling hills had been flattened for the railway.  Now in place of the big dips there were tunnels and bridges, most made a hundred years ago.  I went slowly, savouring the car free riding and mostly continuous company of cyclists and walkers.  As it was Sunday there were many families.  I had my coffee stop at a railway station for the 5 or 6 km segment of tiny railway that runs for the benefits of families.  I had a breakfast bagel and soup at a stop with at least 100 cyclists.  Along the way I got more pictures of a European Robin, the Knockmealdown Mountains near Dervla Murphy’s home and some shore birds near Dungarvan.  My pub dinner on this night was shared with dozens of other cyclists.  A Truly lovely day. 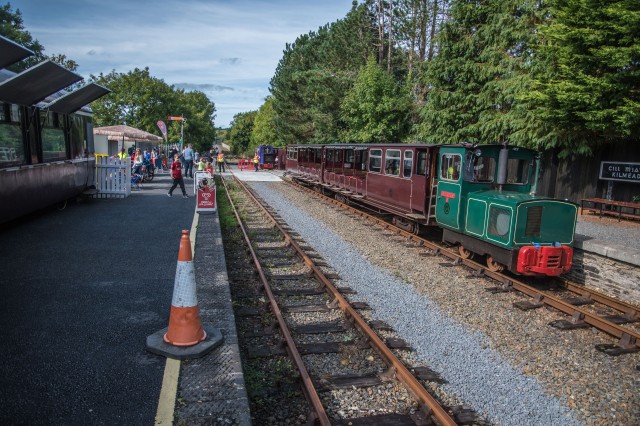 My B&B in Dungarvan was on the outskirts of Dungarvan and that set my route for the day.  The challenge of finding quiet roads is significant.  Because of my location I chose to head west on N72, The N roads are a step above the R roads, but as it turned out it was less busy than the R roads of a couple of days ago.  The wind and rain were back but, rain-geared up, on I went.  I stopped for coffee at Lismore, the home of Dervla Murphy.  Spectacular Lismore Castle, still a private residence, rises above the Blackwater River.  It was nice enough for me to pull out my camera in the rain.

As I turned south onto some R roads the wind picked up but the traffic almost disappeared for more than an hour.  I got back into traffic as I neared Cobh (pronounced Cove).  Cobh looks onto the sea across a passage or two from Cork, Ireland’s second city.  Cobh is famous as the last port the Titanic touched before heading off to disaster.

More rain and heavier wind.  I had a 5 km ride to a ferry and then along a bay to Carrigaline where I picked up my spare derailleur extender from the bike shop we had it sent to.  I now continued on heading west.  I got as far as Bandon and then rather than spending the night I caught a bus to Glengarriff.  The forecast if for 50 to 85 km winds for the next few days.  I didn’t want to get stuck in Bandon if the forecast holds.  I have booked myself in to a Glengarriff B&B for two nights and will go walking for a day before heading out onto the Beara Peninsula, the first of the Peninsulas  on the west coast that I want to ride.

Until today except for my bike failure day I was riding 65-90 km a day, sleeping in nice places with great breakfasts, having mostly pub dinners.  Over half of my time I have spent on quiet hilly roads.  I have not taken many pictures because of the wind and rain, but I would say I am really enjoying the ride and the Irish atmosphere.

The wind was ferocious over night, but it wasn’t that bad during the day and it never did rain.  The breakfast is served late in my B&B so I wasn’t out walking until about 10.  I made my way to a vantage point where I could look out over the bay but vantage points also don’t have much protection from the wind.  The walk I chose was through something called Glengarriff Woods, perfect for a windy day.  I walked on a series of forest trails for about four hours.  It was quite lovely. 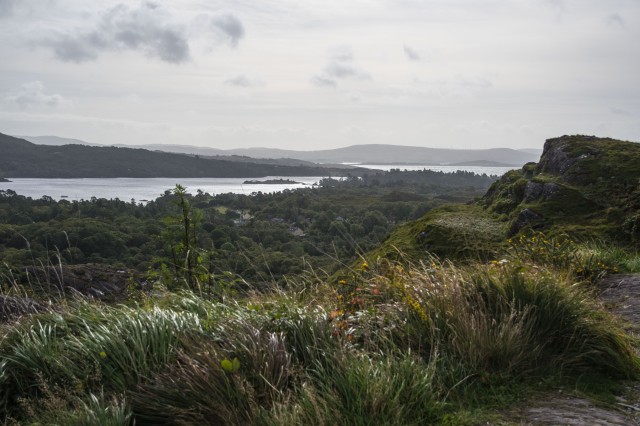 Another rainy windy day is forecast for tomorrow, so my bike trip out onto the Beara Peninsula looks challenging, but on I will go. The next week or so will be heading north through Kerry experiencing these peninsulas and possibly some of the towns along the way.  The weather will kind of dictate what I will do.

I am a retired educator, computer professional. Now I like to travel the world by bicycle, on foot and periodically on skis
View all posts by kenmyhre →
This entry was posted in cycling, Ireland. Bookmark the permalink.

2 Responses to Heading to SW Ireland