May 1st and 2nd Closing the loop

It is 40+ km from Temple 88 to Temple1. I would take 2 days. I left my minshuku below Temple 88 early and soon the Ohenro signs led me on to a final forest path where I lost much of the 600 meters that I would need to lose today. When this final trail finished it was onto quiet country roads. I had a lot of contemplation to get through on this day. I was now finally feeling very healthy and I had a chance to ruminate on the previous 46 days. 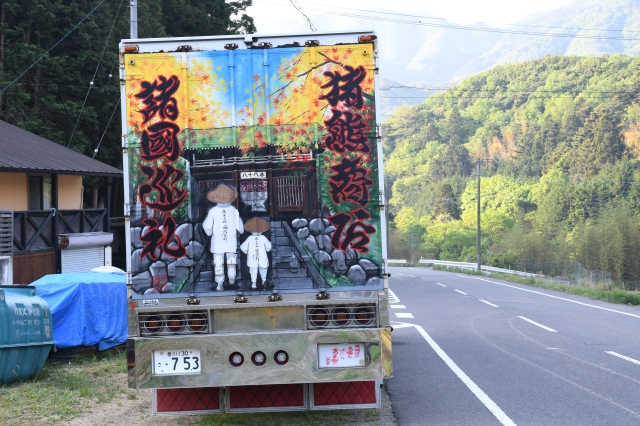 I only slightly regret that I had to ride about 125 km of the walk. I probably made up that difference in poor navigation, wandering around looking for accommodation or food and heading off in search of some other attraction. But then so do the other henro who are doing the walk. There is so much that I would do differently were I to get a chance to start over. But that is all hind-sight now. The easy feeling that I had during the last two weeks, even with knee troubles, are what I would attempt to replicate for the whole trip. That is a very idealistic notion but I believe those who do this trip a number of times would get to that point. Obsessing over all the logistics of the day to day challenge of this walk greatly reduces the value of the walk, and experience would reduce the need for.. But all in all the walk was very valuable to me. I certainly feel pretty good about the walking I was able to do and the experiences I had were priceless. This is a trip that will stay with me for a long time to come.

I got down into the valley about noon and found a Family Mart where I had a break. I still had another hour past Temple 10 and 9 to get to my business Hotel. The next day, reversing my first day’s walk back to Temple 1 was a bit emotional as I recognized different spots and recalled the trouble I had following the route that seems so easy now. I have now completed the circuit. I got another stamp in my book and soaked up the ambience for about an hour before getting the train into Tokushima and my hotel. 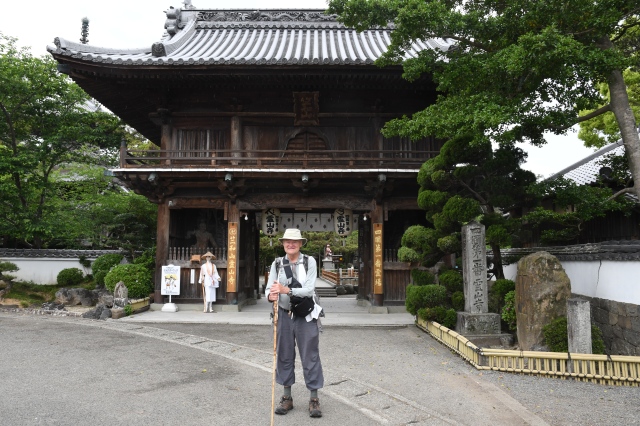 I had to kill one more day in Tokushima and so I walked up and saw the Awa Odori. The most popular street dancing festival in Japan occurs in October in tokushima it is called the Awa Odori. It dates back some hundreds of years and has evolved with the passage of time. But it’s very attractive and a lot of fun. The dance is so popular that throughout the year they have daily presentations in an auditorium. This was a real family affair and as part of the show kids , old people and even 76 year old Canadians are invited up to try the dance

I spent the night at a Henro House near Temple 1. The next morning the man in charge arranged for a middle-aged woman to go back to Temple 1 with me to go through the temple visit process. It was a bit late for me but it was nice to get a little explanation. After that the man drove me to a big famous Shinto shrine and we went through the process for Shinto temples. And then he drove me to the bus stop where I caught the bus to Osaka.

I was just killing time in Osaka. Is it is so out of sync with my Shikoku walk that it took me sometime to adjust. The first morning I walked about 2 hours before many people hit the streets to get to Osaka Castle. Other than that my time in Osaka was spent waiting for my appetite to allow for another meal. There must have been a thousand places to eat within a few minutes of where I stayed. The challenge on Ohenro was often where to find something to eat. My challenge here was which one to pick. I found Osaka far too big to even try to see.

May 7-9 Koyasan
A two hour train ride, the final 15 minutes of which is a cog-train, gets you to Koyasan at close to 900 m. It was cold, windy and raining when I arrived and stayed that way. This is a temple town created by Kobo Daishi 1200 years ago as the centre for Japanese Shingon Buddhism. The mausoleum of Kobo Daishi, who the adherents claim is blessed with everlasting life is here. The mausoleum complex is called Okuno-in. It includes a two km long cemetery dating back those 1200 years, said to contain 200,000 funereal artifacts. It is set in a cedar forest with trees over 200 years old, which are the youngsters in this ancient place. Henro, to begin or to end their pilgrimage come to Koyasan and in particular to Okuno-in to offer their walk to Kobo Daishi. It is the final part of my orei-mairi, the wrapping-up so to speak. 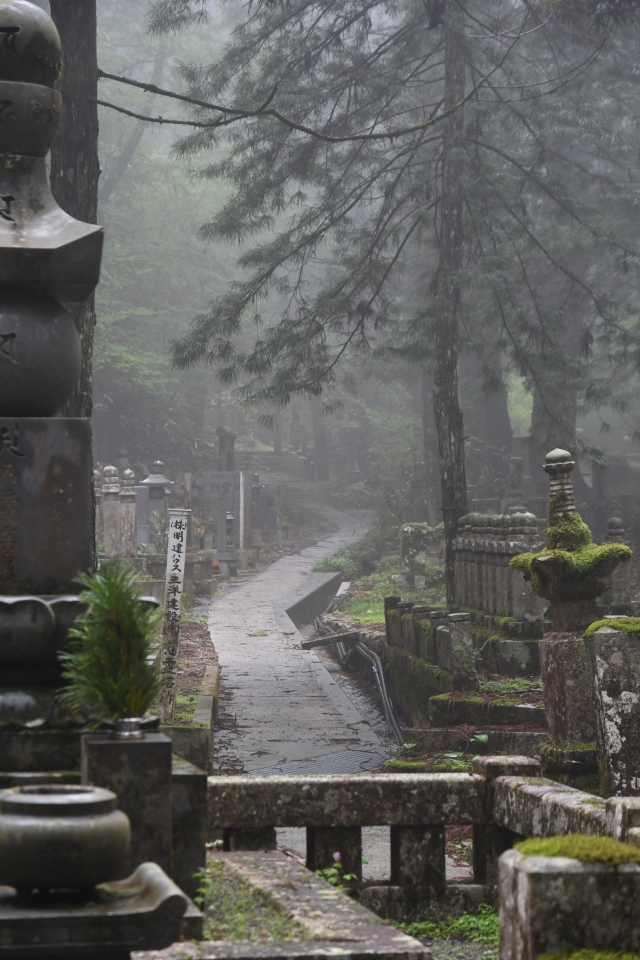 There are about 40 temples at which you can stay, Shukubo, at Koyasan, and they are all heavily booked and a good fifty percent more expensive than any other places I have stayed here. You attend service in the morning and eat vegetarian. I would think only a small number of people here were henro. It reminded me more of a less commercialized Banff than any other place. 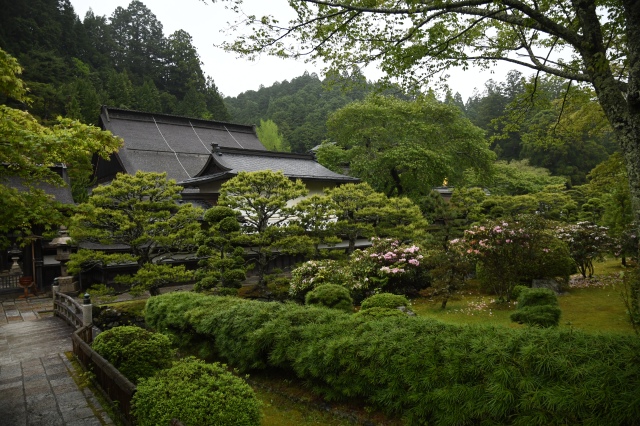 Of the other places I visited here Kongobu-ji was next most important. It is the head temple for Shingon Buddhism. Of note here is the largest stone garden in Japan. I have been thinking of these gardens as Zen gardens, but I guess they are not exclusively so.

I was quite moved when I got the final nokyos in my nokyocho from Kongobuji and Okunoin. The monk at Okunoin who did the caligraphy leafed through my book, looked at me and then congratulated me in both Japanese and English 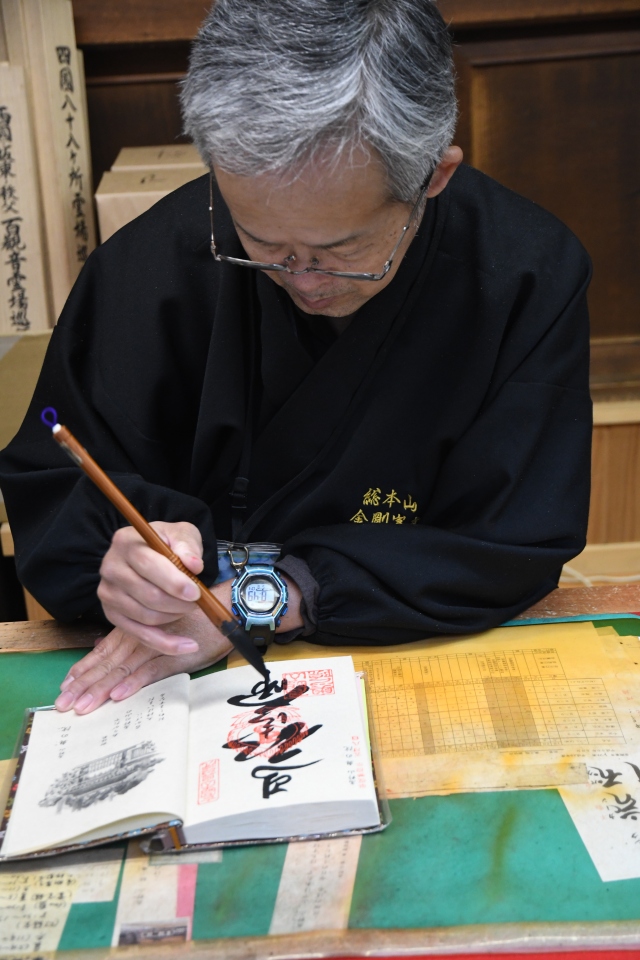 To completely finish the experience I took trains to Wakayama, a port city below Koyasan and then the next day, May 10, a ferry back to Shikoku. The ferries were more basic and trains would not be invented for 1000 years but Kobo Daishi and 1000s of pilgrims since have navigated their way around this pilgrimage and then across to Koyasan. Each would have had their own experiences and gained value in unique ways. While not one of the devout I can now understand a small part of why pilgrimage is pursued.

Just to wrap up a bit. I was less prepared for this trip than for most of my trips in the last few years. I did not figure out how I would be spending each night until I was into the trip. As a result I carried too much in the way of sleeping equipment and cold weather clothing. I probably should have brought a smaller camera. Using a tablet to send these posts was adequate but less satisfying for me then the laptop that I normally carry. Even with a separate keyboard I did not enjoy the writing as well. The other problem with this system is that I I didn’t set up photo editing and so I’m less happy with the pictures that I have attached to the posts.

Those issues aside, it was still wonderful. Perhaps I should do another one…

I am a retired educator, computer professional. Now I like to travel the world by bicycle, on foot and periodically on skis
View all posts by kenmyhre →
This entry was posted in Japan, Pilgrimage. Bookmark the permalink.