Into the Final Dojo (Nirvana)

Leaving Matsuyama saddled with a bad knee resulted in a few days of transport assistance, but I was able to work through that and have found a cadence that removes the need .  The end is near.

April 16th day 32
At 7:30 I left the Matsuyama youth hostel with the idea of seeing how far I could walk on my bum knee. It began to hurt early so I got the train for about a 20-minute ride. This left me with a 4 kilometer walk to Temple 52, set into a small forest after a short climbt. I met Rob from New York, only my second American. He was beginning a 3 week mini-ohenro, having been here and done temples before. He had come by taxi and will do a combination of walking and public transport. I never saw him again.
It was another 3 kilometer walk to get to 53 , a small urban temple. I arrived at my hostel at about 1:00 to a sign on the door directing me to go visit the Onsen. This was not something I objected to so I spent two hours having a snack and soaking in a selection of pools looking out onto the Seto Inland Sea.

The hostel owner is an interesting guy running this place as an independent hostel. He is a dog lover, a pack rat and an experimental cook. I was joined by Chris a young German boy about to set out on a short Ohenro after 3 months working here on farms. Our cuisine was an artful mix of Western and Japanese. In the morning we were offered western or japanese and we chose western. The result included freshly baked honey bread that was a real treat.

I was much happier with this day. It was a bit overcast which made walking more pleasant. Temples 54, 55, 56 and 57 are 3 to 4 km apart spread about Imabari City. Parts of the walk took me through some enormous cemeteries. I was able to regulate my walking speed so that my knee did not act up too much. Part of the solution seems to involve stopping from time to time. At midday I actually stopped for lunch something I don’t often do. On this day I used Skype to call Lilly as midday here connects with Calgary in the early evening.

Temple 57 is on the outskirts of Imabari and from there it was a lovely hour walk up into the mountains to Temple 58 where I had booked a Shukubo; temple accomodation. I arrived at 2 so I had a nice recuperation from my 17 km walk. I felt a little bit better, now hoping that if I can walk this kind of distance each day, supplemented by some transport, I should be able to get my Ohenro done. My leg was quite tired but I’m pretty sure I’m not doing any damage. 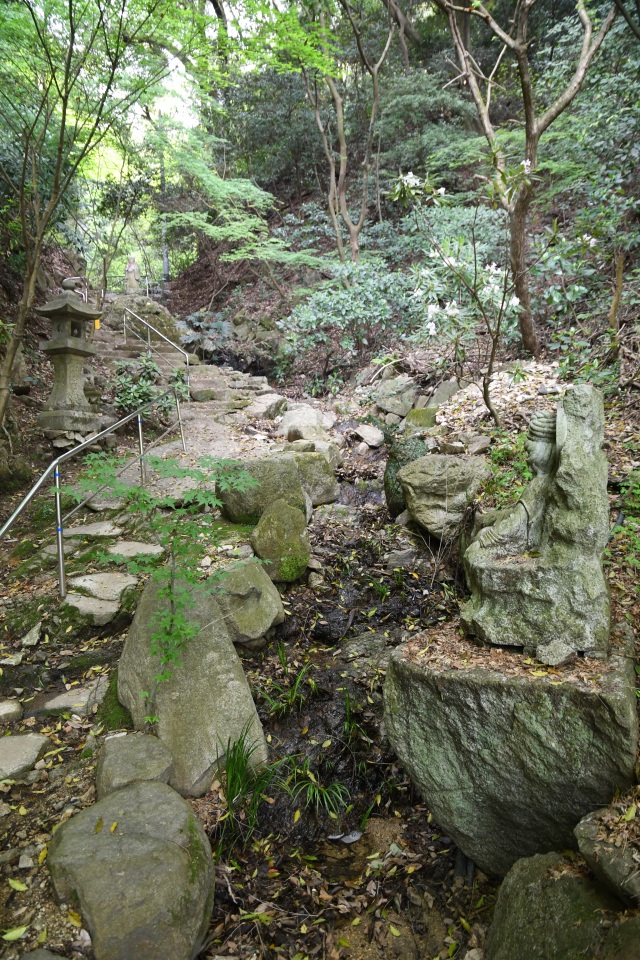 There are a few differences when staying at a Shukubo. Possibly most notably is that the food is vegetarian. I think it is still very tasty but for me maybe not quite as fulfilling. At this Temple the bath was more like an Onsen with room for five or six people. Another difference is that big tour buses often book into the temples. On this day a bus arrived at about 6:30 with possibly 50 people and everything now centered around the needs of the tour. The final difference is that there is often a Buddhist service. The service on this vsit was in the morning before breakfast. I attended and enjoyed the chanting and much of what happened. But then the monk just started talking to the group. Naturally it was in Japanese and so I left after a bit. The downside of the stay was that I didn’t get away from the temple until about 7:30 an hour later than normal.

It took an hour and a half to drop down out of the forest to temple 59 the final Imabari temple. From there I walked another 45 minutes to get a train that moved me on up the road a ways. I was now going to try something a little different. I spent the rest of the day visiting temples 64, 63, 62 and 61, backwards in other words. Unique among the temples visited so far was Temple 61 which is a big modern temple. I don’t know much about why this one is so different.

I then checked into Ryokan Komatsu for two nights. The reason for skipping Temple 60 is that it is a full day up and back from Komatsu where I would be spending the night. Getting in in the afternoon I had time to do temples 61 to 64. I chose to do them in reverse order because 61 was closest to my ryokan. This was a very good place to spend two nights for a number of reasons but the food was a prime reason. Dinner each night was a hot pot with different ingredients the second night. 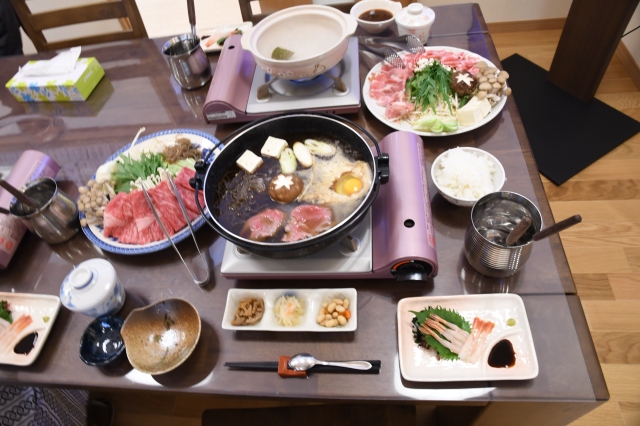 April 19th day 35 – Yokomineji, Temple 60
I left for temple 60 at 6:30 finding my way out of town onto to a little used trail. The trail was indicated in my Shikoku Guide but is not the main trail that people take to go up to Temple 60. So I was not getting little ohenro signs that I’ve come to depend upon so much. It was an hour into the walk before I was confident that I was on the trail. My trail started out as what seemed to be logging roads climbing up into the forest. I was happy when my trail merged with the normal foot path coming from 59 and the regular henro signs began to appear. This would be a lovely day; 18 km, rising to 750m, possibly 1000m up and down, 6 ½ hours.. I was carrying a light pack and even with my awkward gait made good speed. I had a long lunch break at Yokomineji. I found it very peaceful and I was happy my knee did as well as it did.

April 20th Day 36
I’m hoping this might be my last transport day. I took the train about 25 km and walked another 10 positioning myself for the mountain trails. At my minshuku were Stein from Denmark and Peter from Holland who I met at Komatsu

April 21st day 37
I was able to pick up the henro trail leaving town up to the base of the mountain. And then I lost it for a while and never was confident that I was on the trail until Temple 65 appeared. This Temple is about 300 meters above the sea and the town down below. Peter and Stein caught up to me here just as I was leaving on a quiet mountain road that never did lose much altitude. Again there were no henro signs. I started to head up a road that I knew was wrong so I turned around and finally did find a little henro sign and then a hut. As I was sitting in this hut with three young kids and their dog Peter and Stein arrived. For the rest of the day I was on course again. 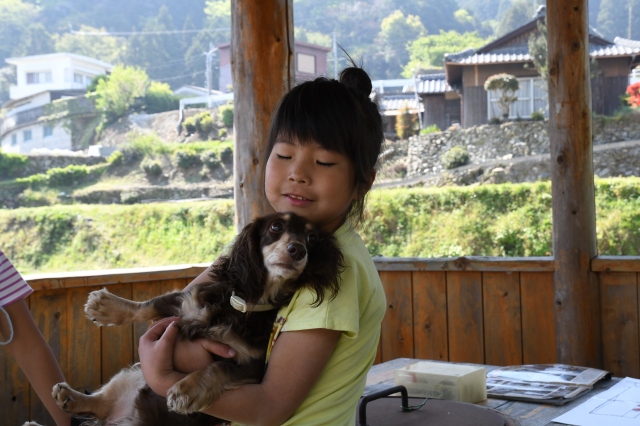 There was a fairly significant drop down into another Valley and then as the afternoon heat began to get to me we had to climb to and through an 800 m tunnel that was one of the worst yet. But just on the other side Stein and I stopped in a roadside restaurant and had a wonderful bowl of udon. Peter who was trying to get to the next Temple carried on. The minshuku Stein and I were staying was only another half hour. I checked into minshuku Okada at 1:10. Within the hour I had my bath, washed my clothes and was sitting in my housecoat in the yard having a beer. Even though it was an early day it was still over 20 km and very tiring.
Also in the minshuku was a mountain guide with two female clients. He was guiding them around Ohenro in sections. Tomorrow we would take on the climb to 926m Temple 66, the highest point on the circuit and one of the nancho temples

April 22 Day 38
The trail continued down for about 15 minutes and then began the torturous uphill. This was the Henro-korogashi part. Nothing very dangerous but a real calf stretching hour and some. Stein passed me about half way up. It would be nice to be 68 again, or maybe I can blame it on my knee. We arrived at temple 66 at 8:15. Peter was still there. He had used the tsuyada or free accomodation that some temples have. There is usually no bedding or mats and only sometimes are baths available; in this case Peter didn’t get either.

On the way up to 66 I left Ehime, the Dojo of Enlightenment and entered Kagawa, the Dojo of Nirvana, the last leg of my journey.

The part of this day I was anxious about was the two hours down, but the trail was not quite as steep and I was only a little slower then going up. One more nancho temple behind me. Onto the quiet rural roads I had another 8 km to Temple 67 followed by 9 more to my minshuku that was close to temples 68 and 69 that share a courtyard. This may have been the toughest of my final days.

April 23rd day 39
This was a 25 km per day but flat except for one small part. I would visit temples 70, 71, 72, 73, 74 and 75. Temple 71 rose about 200 m above the flat and it involved multiple sets of stairs going up and a lovely bamboo forest trail coming down. Other than that the day was spent mostly on quiet neighborhood streets. With all of the temples to visit there wasn’t much need to stop along the way. Pleasantly, I was stopped five times for ossetai which included an orange, two rice balls, candy, and two glasses of tea. I think this is the most ossetai I have had in a day to date. It was a lovely day but still tiring as it is has been hot the last few days.

Peter, Stein and I all had Shukubo at temple 75, Zentsuji, certainly the largest and most important of the 88 Shikoku temples. It was where Kukai was born and as a result the temple complex must number twenty or so buildings. At the morning service there were seven monks involved. Normally there has been just one.

From here Stein will take off as he leaves May 1. I will slow down to stretch out my time. I am beginning to develop a plan for my remaining days.

I am a retired educator, computer professional. Now I like to travel the world by bicycle, on foot and periodically on skis
View all posts by kenmyhre →
This entry was posted in Japan, Pilgrimage. Bookmark the permalink.