In the last 5 days since my last post I have visited 4 temples and have  been walking along the southern coast of Shikoku. I have many more days on the southern shore before I finally begin to heading north again. I have had some physical issues and it meant that I had to take a day off but I am under way again.

March 22nd – day 8
Starting from Yuki at 7 in the morning I soon met the couple I had been walking with since temple twelve. We walked for a few minutes and then the sea appeared. A few minutes after that we passed the platform that Jennifer from Oregon had spent the night on. I think she was having a phone conversation when we went by.

The first few hours of the walk went through forest on a very quiet old road. A white van came along, stopped and an animated man jumped out to tell me in broken but pretty good English that a better trail ran below the road. He drove on but a few minutes later was waiting again offering to lead me down to the trail. He then explained that it was a haiku trail. Every 20 or 30 m there was a post with a haiku inscribed on it. Soon the trail led back to the road and off he went again. But again he was waiting and pointed out a trail that went down to the sea. I headed down the trail for about 15 minutes before I saw my friend coming up the trail to make sure that I had not fallen. He then arranged to meet me at a shelter where he brought both hot and cold drinks. He was not yet through with me as we will see.

I arrived at Temple 23 about 11. One of the towers is on the cover of my guide book. I spent the normal half hour going through my process, climbing stairs and taking pictures. I tried to make a booking down the road for a place to stay but did not succeed. Leaving the temple I saw a likely looking place that could be a restaurant. It was in fact a fast food Udon restaurant. There were three other Henro . Two were a couple in the early seventies that I had met earlier in the day. The man showed me how to dish up my udon and prepare it. 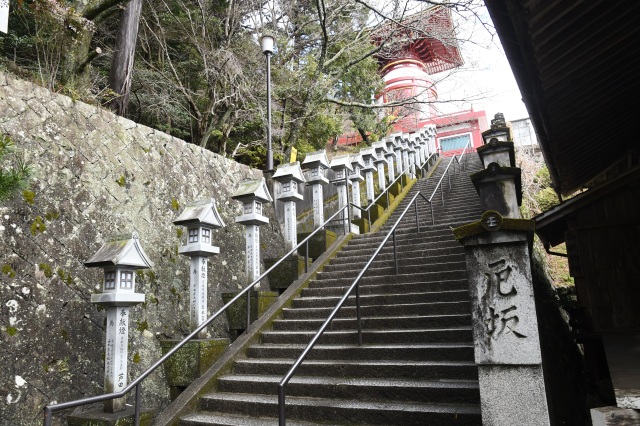 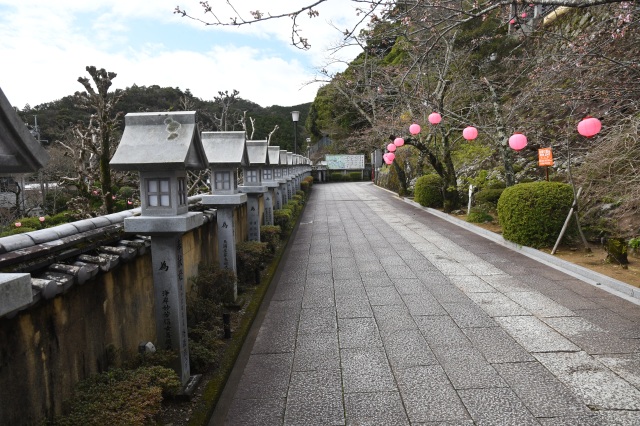 On I went. I was now going a little slower than earlier in the morning. A bit over an hour later there was my friend on a bicycle. I don’t know how long he had been waiting but he took me off the road a few minutes to meet another friend. We sat on a platform overlooking a small creek had sushi and Japanese noodles, hot and cold drinks and identified birds. What a nice man. 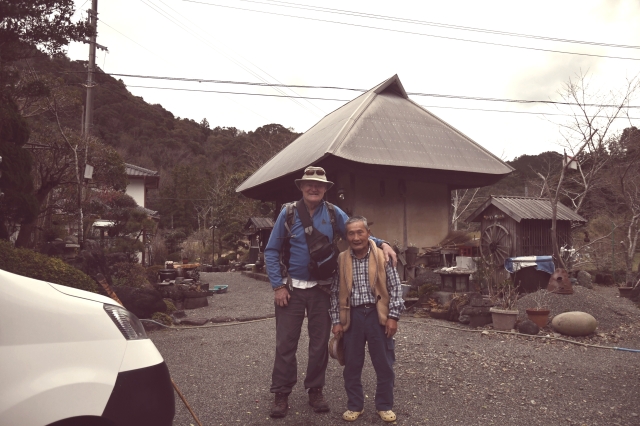 At around the 30km mark I found a henro shelter that I was thinking of using to roll out my bed roll in. It didn’t look very inviting but I didn’t seem to have too many choices. I noticed the police station across the street so I went to ask if it would be alright to sleep in the shelter. They got fairly excited at this and got on the phone and found me a minshuku a bit over 2 km off the track by the sea. I used my GPS to get me there. Too bad the GPS can’t do the walking. There were no meals but with the food I had that afternoon I didn’t need anymore. There was a lovely stretch out fully hot tub. 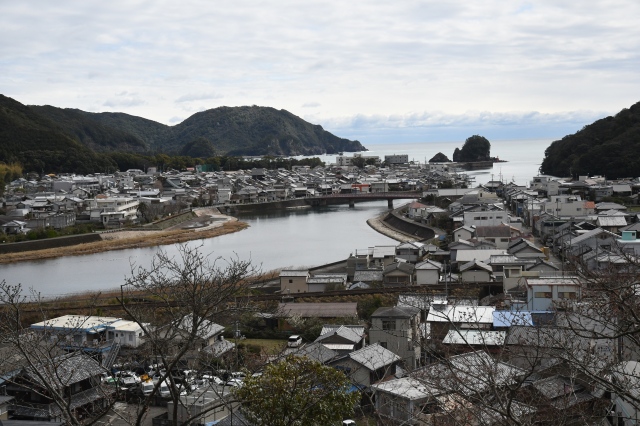 Day 9 A Henro House
It took me a bit over half an hour to get back up to the highway where I walked into a Lawson’s convenience store. Some have a place to sit down to eat and I had coffee and a nice chicken sandwich for breakfast. I still had not made an arrangement for the night and I was worried about it when a Japanese man in a full henro outfit said hello and asked me if I wanted to walk the old henro route. This was a little strange as the Japanese aren’t usually so outgoing and I didn’t know what he was talking about. So I turned him down and kept going. It occurred to me as I got a few hundred meters up the hill that this was my friend from yesterday. The henro outfit had me fooled. I felt so bad after he had being so nice.

Most of the morning passed uneventfully. While at a rest shelter on Wi-Fi I was able to book a Henro House that was only a bit too far away. So the day ground away at my feet as I made my way down the road. The saving grace of course are the incredible ocean views on this stretch of the walk. But my feet hurt more and more as the day goes on. I stopped in at 2 grocery stores as I got close because Henro Houses do not provide food. They are inexpensive places to stay where you can cook your own food. It was a very strange place but it did have all that I need. I spent an hour was an interesting custodian trying to book a place for the next night. Once again the only success I had was right down at Cape Muroto. Like the last few days it was too far for my worsening feet.

I was on the road again at 6:30. The first thing I faced was about a 12 km section with no towns or services. The road itself climbs periodically over little head walls often with an a tunnel at the top. 2 to 300 M tunnels aren’t bad but when they get to be 500 or more they are quite uncomfortable to walk through except early in the morning when traffic is light. But by and large the walk on these days that are sunny and not too hot is pretty nice. I am now limping quite a bit because I have a blood blister underneath the ball of one of my feet.

About noon I had a nice rest and lunch and the towns started to occur more frequently again. As the day wore on I was going slower and slower and it became obvious that it would be a struggle to get to my booked Hotel. It took a bus about 8 minutes to go the last 5 or 6 km that might have taken me two hours. I never set out to be a purist about this walk but I had already lost that claim in Tokushima. I do however intend to keep walking all that I can. What I need to manage better are my room bookings.

Hotel Misaki
I dropped my bag off at my hotel and set off with two objectives. I needed an ATM for money and I needed to visit Temple 24 straight above my hotel. At the Visitor Center for Cape Muroto they indicated the next ATM was about 6 km away in town. I was really struggling at this point, no doubt too tired to think well so I asked them to call a taxi to take me to town. The taxi driver didn’t have a clue. We went to three different ATMs with no luck. I had him stop at Temple 24 on the way back. It is a lovely Temple up on the hill but I was now too frustrated to enjoy it. After completing my process at the temple I was able to walk down a switchback trail to my hotel.

I would say the Misaki is more ryokan than hotel but it is larger than normal so that might be why they call themselves a hotel. The set meals are the best I’ve had so far. Thankfully they also take Visa cards which further differentiates them from most ryokan.

An added treat for me was the little league baseball team and their 11 parents that were also guests at the hotel. They were obviously on a field trip and were having a blast. They ran around the halls and splashed joyously in the hot pool. I had said Ichiro (Suzuki) while first walking by them and so they repeated the hallowed baseball player’s name continually as we met.

By the next morning the internet confirmed that I had a money problem. I seem to have forgotten from my last trip that very few ATMs except foreign cards. My body also needed a rest. So I decided to take the day to find some money. It took me 6 hours three bus rides and a two-hour bicycle rental before I had some money and was back at my hotel. But my feet were rested, I had some money and I had learned that I have to be careful to keep the money stocked up. A nice bonus was nice long Skype calls with Lilly and Owen while waiting for one of my buses.

Day 12
After a great breakfast and a departing photo with the owner I was heading down the road at 7:30. Rounding Cape Muroto I was now headed Northwest for a while. It was a lovely walk along the Seawall and there was a bit of cloud cover to keep it cool. It took an hour and a half to get to Temple 25. It is a small Temple high upon a hill nestled into a neighborhood.

I was walking steadily my feet felt pretty good. The blisters are still there but at least the swelling in my feet is down a bit. I was also successful in booking a place only about 18 km away so it would be a leisurely day. Temple 26 sits high on a head wall above the ocean. Once on the trail up the mountain the forest closed in around me. At the temple a woman was offering ossetai of tea and boiled potatoes. That was a first. On the way down from Temple 26 just before I hit the switchbacks I found a nice bamboo pole to match my bamboo Kobo Daishi that I had been using since Temple 18. I had to cut it to length but it will do me nicely at least until I’m up and down the next nancho temple which likely will hit me tomorrow. On the steep Henro-korogashi trails I am much better with two helpers. 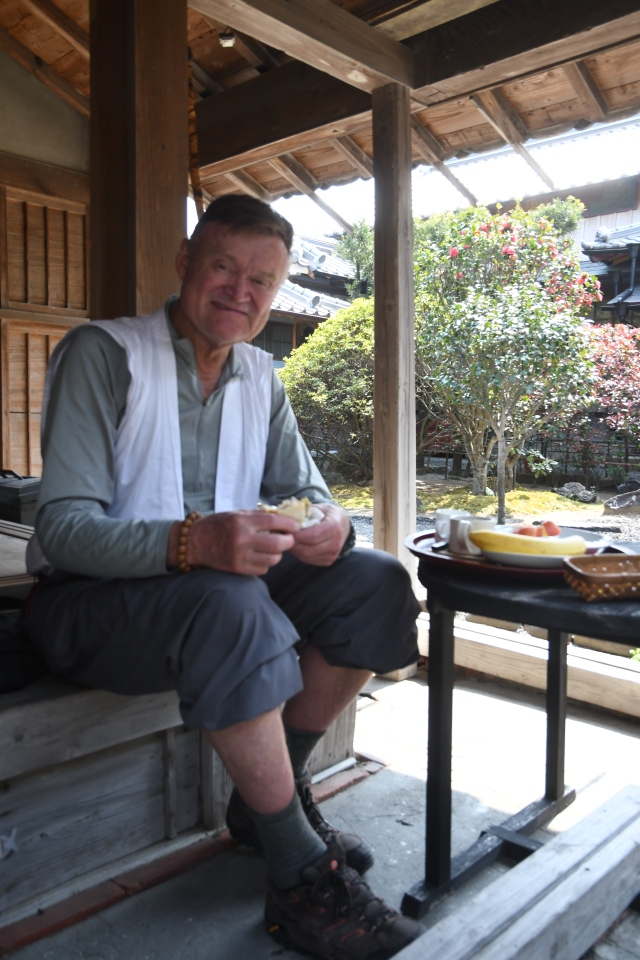 At 1:00 I saw what my book identified as a restaurant but was actually a ryokan. My booked place was only 300 m further along but does not offer food. The confusion of not having language skills wins again. At any rate all worked out. I had a lovely easy day. All my clothes are washed and I’m moving reasonably well. I will cook for myself.

It is unusual for me to include three photos of myself in a post but two of them are to provide scale.

I am a retired educator, computer professional. Now I like to travel the world by bicycle, on foot and periodically on skis
View all posts by kenmyhre →
This entry was posted in Uncategorized. Bookmark the permalink.