Crossing Pasu Setret I left Maramures about noon to a 25 km downhill run into Transylvania, the largest of Romania’s regions.  And the one that has been the cause of the most controversy over the years.  For hundreds of years Transylvania was under the control of the Hungarians and then part of the Hapsburg domain of the Austro-Hungarian Empire.  But then WWI and WWII happened and various deals were made, some chose the wrong side at the wrong time and so forth.

The Hungarian claim to Transylvania had been their long tenure as controlling owners.  The Romanians claim based upon original tenancy going back before Roman times and their always predominant population within the area.  At the Treaty of Trianon in 1920 Romanians comprised 56%, Hungarians 38%, or so; the rest primarily German who were invited by the Hungarians to occupy parts of central Transylvania to keep the Russians and the Ottomans from moving in.  Very complicated business, and one that I am sure stimulates many hours of mental discourse in the cafes and beer halls.

But as interesting as I find these matters as I crossed Pasu Setret, my main concern was how I was going to find my way across the morass of roads that my maps spread before me.  Romanians claim that because they have buggered their entry into the EU they have missed out on a lot of the benefits that come to countries like their neighbour Hungary.  I so enjoyed the bike travel network I found in Hungary which is funded primarily by the EU, or so those I share a beer with claim.

Heading down from Setret I was on a road marked as fairly major on my maps, but initially it was not very busy and I was able to go almost as fast as the cars anyway.  As they say, what goes up must come down, and for cyclists this is very good news. To savour my drop I made a point of stopping part way down for lunch.  I parked my bike, walked across the fast flowing creek I had been cycling beside and entered what was a fish farm with restaurant attached.  I sat in the nice picnic shelter table and had Ciorba de Peche, which is a sour fish soup.  The sour taste is more like borsch and it is served with sour cream.  This one was wonderful.

Carrying on, the road flattened a bit, the traffic got heavier, a head wind picked up, my legs and enthusiasm began to waver.  All the usual things.  Instead of aiming for Bistrita I found a pension at Nasaud about 3:30.

Each night I pour over my maps, and sometimes find help on the internet .  I am looking for small roads that are paved, marked on my map with a faint yellow line.  But I also need to get down the road and that has become my problem.  The small roads don’t really go anywhere.

The next morning I had to take a heavier yellow road to Bistrita, only 25 kms, but with two significant climbs on the way.  The first one went well, but on the second the traffic became quite heavy.  I have never seen a shoulder on a road in Romania and so when I am slow on a steep climb and the cars are trucks are trying to get by I have no wobble room.  It can be stressful.

Bistrita is a fairly large city with a nice car free central area where I sat having a coffee spinning my decisions in my head.  I headed off with an equal chance of finding the railway station or the small road out of town that I had tentatively identified.  The road won, a steep winding road got me out of town onto rolling hills and peaceful roads.  For 60 kms I had very nice riding.  It was very hilly and so tough, but nice until the afternoon wind took a bit of a toll.  It was one of those faint yellow line rides that was kind of going where I wanted to go.

Reghin was my next night’s stop at about 4:00.  The day had been pretty nice but the morning had rung some warning bells for me.  I had also just had five days of riding and mentally I was a bit down.  I spent some hours trying to work out what I was going to do. Sept was coming to an end and half my time was gone.  I spent some time on the internet trying to figure out where the trains could take me.  I actually had gone too far south and not far enough east to get to some of my potential destinations.

The next morning found me at Reghin train station where I bought a ticket to Brasov, too far down, but the best I could do.  The train left after 11:00 and took until after 6:00.  It went about 250 kms to get a bit over 150 kms south, and stopped 100 times.  I had many seating companions.  Sometimes my six car compartment was filled sometimes the whole car empty.  I flirted with an 18 year old striking school girl, competing with her stricken male companions.  She easily played us all.  I had a long difficult to hear conversation with a twenty something boy who claimed he could speak seven languages.  The back doors of the car were open and flapped in the wind as the train rocked it way through the hills.  My bike was held in place between the two open doors by one bungee cord.  I checked it dozens of time to ensure the cord was still attached and my bike had not gone sailing out one of the open doors.  I found out later that someone had taken my odometer failing to take the wheel transmitter meaning that he got nothing, but a significant loss for me. 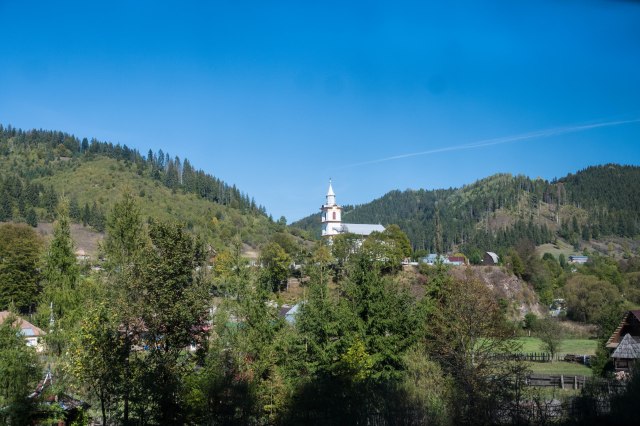 I spent four nights in Brasov; my plan had been two.  I washed clothes, walked the town, did a full day tour with Dan Negoescu a cultural guide who is a connection from John Dodd in Calgary, hiked the hills above the town, and spent an inordinate amount of time planning.

Brasov is one of the tourist centres for Transylvania.  It was originally a German town and still had the feeling of a Bavarian mountain town, although the Germans who came were not bavarian.  Like so many of the towns I have seen on this trip there is an old town that was originally walled.  Inside the walls many of the roads are car free replaced by cafes and restaurants.  The Black Church is an enormous presence and it conducts its services in German.  It is very cold in the morning and as soon as the sun drops, but the days are lovely. 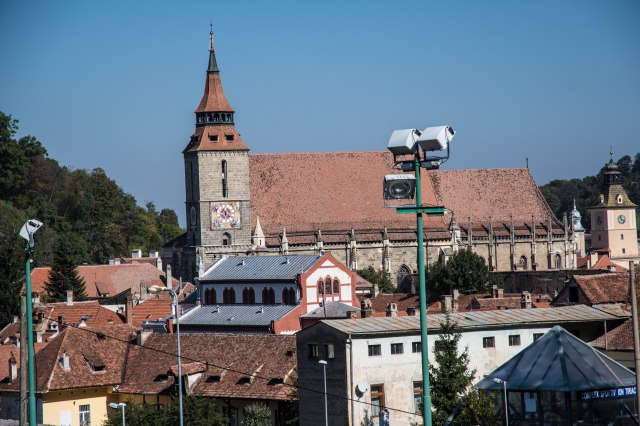 I went on the tour with Dan the guide, a retired American couple, and a young English horror fiction writer.  Dan drove and talked great history and communist era times when he wasn’t singing along to Frank Sinatra on his CD.  We went to 19th century Peles castle, the most visited in Romania, Bran castle used by Bram Stoker as his model for Dracula’s castle and Rasnov Fortress, the latter two both 13th century.

Peles was begun in 1875 as the summer palace for Romania’s first King Carol I.  It is incredible.  Architecturally it was created by Karel Liman, who must have been a genius.  It was all impressive, but the design, wood work and overall finishing is beyond imagination in this day when craftsmanship at this level is almost impossible. 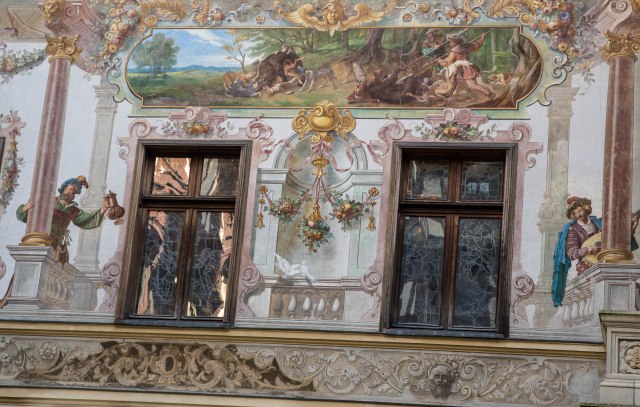 Bran, built originally by the Teutonic knights, was reworked by Karel Liman as well when it was returned to then Queen Maria by the village of Bran. 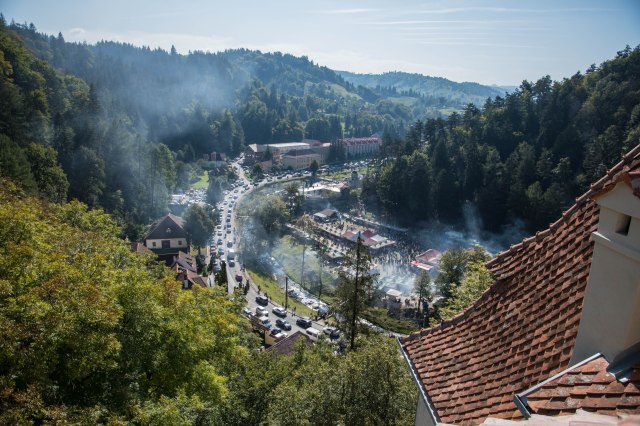 This was a great tour and hit a few of the Transylvania high spots that would be hard for me to get to by bike or public transport.  Dan was filled with the kind of information that I find interesting.  Great Day.

My final day in Brasov was a great walk up 940 m high Mt Tampa that rises abruptly out of the old town.  I was able to spend three hours traversing the tree covered mountain by chasing a few birds along the way.  It was lovely to be out on my feet in what feels like wilderness even though I was never more than 20 minutes from the tourist mecca below.   I anguished about heading out into the deeper mountains but the logistics of getting there was just going to be too much effort for the time I was prepared to give it.  Mt Tampa turned out perfectly for me. 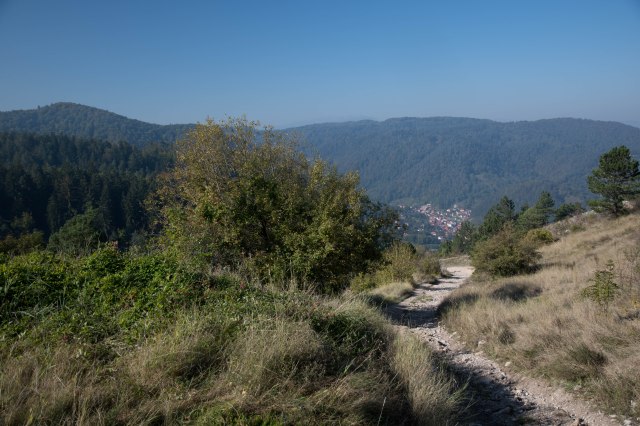 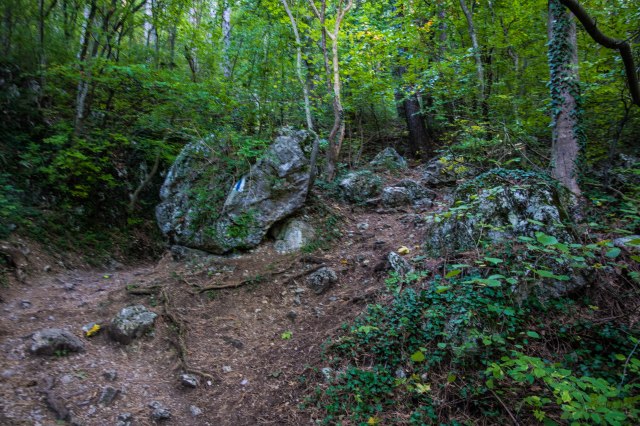 Because of my bike it will take me two train days to get to the Danube Delta area.  When I turned up at the Brasov train station hoping to get the 8:30 train which would have linked in Bucharest to an afternoon train to Galati in the Delta, I was told the first train I could take my bike on left at 13:00.  On the upside it left me time to find a good bike shop to replace my snitched odometer.  Oh well, hopefully tomorrow I will be closer to getting on my bike again.w

I am a retired educator, computer professional. Now I like to travel the world by bicycle, on foot and periodically on skis
View all posts by kenmyhre →
This entry was posted in Romania, South East Europe. Bookmark the permalink.