Leaving Quy Nhon was going to be a bit of adventure.  It was not yet 7:00 and the road was only sparsely used and so I was a bit anxious that my chosen path would lead eventually to hwy #1.  My map, which is not very detailed shows a fairly long secondary road out of Quy Nhon, I just hoped that was the road I was on.  I started to climb immediately as we left town to enter a forest.  About 4 km climb lead to a big drop and then immediately into a second climb.  From this I could look back on the crescent Beach and high rises of the city.   It was close to an hour before I got my morning Pho Bo, but it was a good one and so even though the hills were burning energy faster than normal I felt good.  The hills would last all day but I eventually hit hwy #1 and the relief at knowing I would not have to reverse my way was replaced by the stress that Hwy #1 traffic brought. 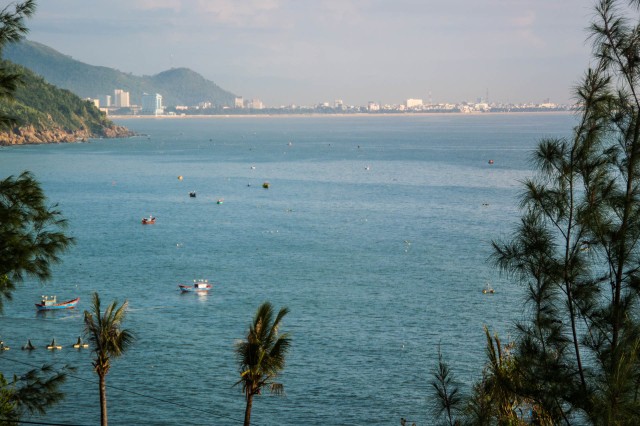 The day was sunny from the start and by 9:00 it is more than my comfort level, and so my drink stops are beginning to be what I look forward to and what keeps me grinding away.  One improvement that Hwy #1 brings is slightly better gradients.  On the secondary roads the gradients are steeper and my slow speed puts me in a tenuous position. If I am going too slow and trucks passing are also going slow I have a hard time holding a straight line until they pass.

I pulled into Tuy Hoa about noon, quite depleted.  I was going to try something different here.  In the centre of town I firstly sought out a nice quiet restaurant.  I found a god one.  I had a beef dish with white rice and two beers.  I took well over an hour to rest in the breezy open restaurant before I headed out looking for a room.  It took me   a couple of tries, but I found my best $10 place.  I headed into the windowless room (often the norm here), showered and got the AC going at the right temperature.  I slipped out late in the afternoon for a coffee in a nice place, before returning to finish watching the Aussie Open Final.  Most important on days like this is to get my body temperature as low as possible.  I went back to the same restaurant and had a second meal, just as good and as reasonable as the first.

Leaving Tuy Hoa, I was again just heading south on what I supposed was the in town branch of the hwy.  It was very broad, it crossed an enormous river delta and all was good except that the traffic just about disappeared.  I did ask, “Ho Chi Minh?” and got a positive reaction and so I kept riding, past the airport and then two of the four lanes were not paved.  I was worried now, but more so when the road became a narrow two lane passing through some villages; by now I was well over an hour out and was approaching the little mountain range that I knew would involve a good climb.  The road improved as it hit the mountains and it was wonderful.  Wonderful sea views, smooth nice road and no traffic.  I was heading south, but my worry now was that the road would lead down onto a peninsula which would not connect to the main road.

I had about half an hour of real mountain riding with lots of up and down.  At one time I actually heading north, but then over a pass and I hit the sea again.  Hundreds of boats were out in the harbour but there was no town and still no Pho Bo.  Finally I did hit a little town and I could see traffic way up on the mountain.

This was a little fishing village and I pulled into a noodle shop and they made me Pho Bo, even though fish was everywhere.  A nice looking 59 year old lady sized me up and following all the usual questions, this time in pretty good English, she suggested that I needed to take home a nice Vietnamese wife to cook and look after me.  She hesitated a little when she found out I was 74, but then she felt that wasn’t much of a problem.   Over the next 24 hours I would get two more suggestions that there are lots of attractive single ladies here. 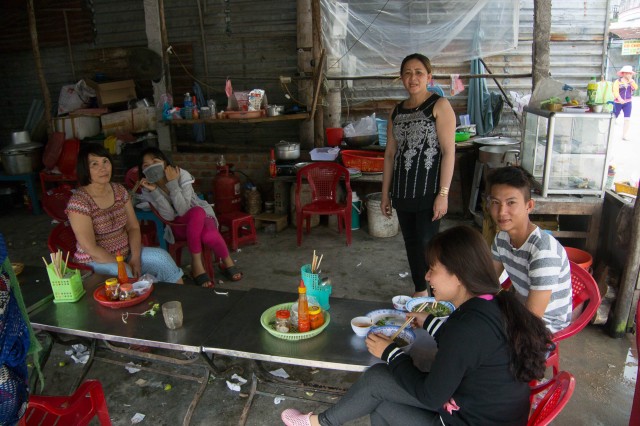 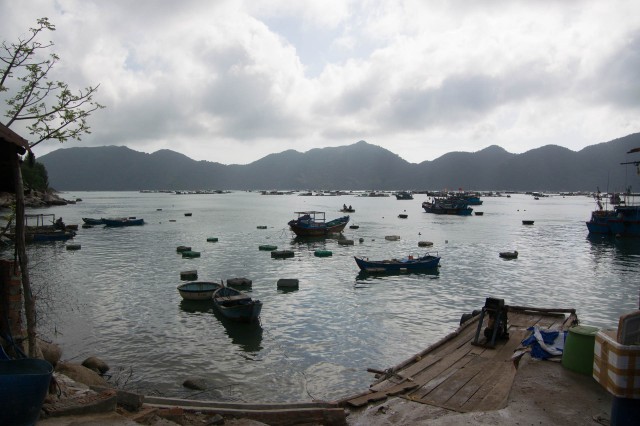 I had a 2 ½ km switchback climb up to the main highway and again, as yesterday, my worry about route was over as was the idyllic morning bike ride.   Part way up the climb a motorbike pulled behind me and pushed me along until we met the highway.  Not very pure, but thankfully I’m not a purist.

The highway was not as wide as usual, because of the mountains, and so I had some anxious moments on the climbing, but then I had some wonderful down hills.  Pulling out of the mountains the heat really began to hit me.  I had worked hard all morning and I made the decision at that point that it would be a two day ride to get to Nha Trang, rather than one.  Little did I know at that time that it would take me three days.

My intermediate stop was to be at Van Gia and I was determined not to ride through town and miss the good hotels.  The centre of town passed and I still had not found a spot.  I was going to ride past the long row of government type buildings and then actually turn around; something I have not yet done on this trip.  And then a motorcyclist pulled alongside and began asking questions in very good English.  He asked if I needed help and I said I was looking for a hotel.  He asked if I would come to his house for some refreshments.  It sounded good to me.

We turned off and pulled into a courtyard with two small houses, lots of plants, quite a few birds in cages, some fancy chickens.  There were a number of motor bikes and pedal bikes, one a pretty good looking road bike.  Dam, my host, is a teacher who had begun bike riding in the mornings for conditioning purposes.  His mother and father live in one house, he and his wife and two young kids in the other.  After tea and lots of water the women brought out some lunch.  When the ladies got me alone they thought that it was too bad for me to be alone when there are so many nice ladies around. 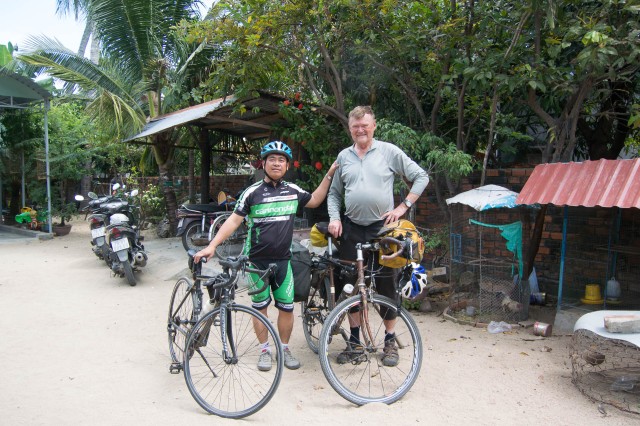 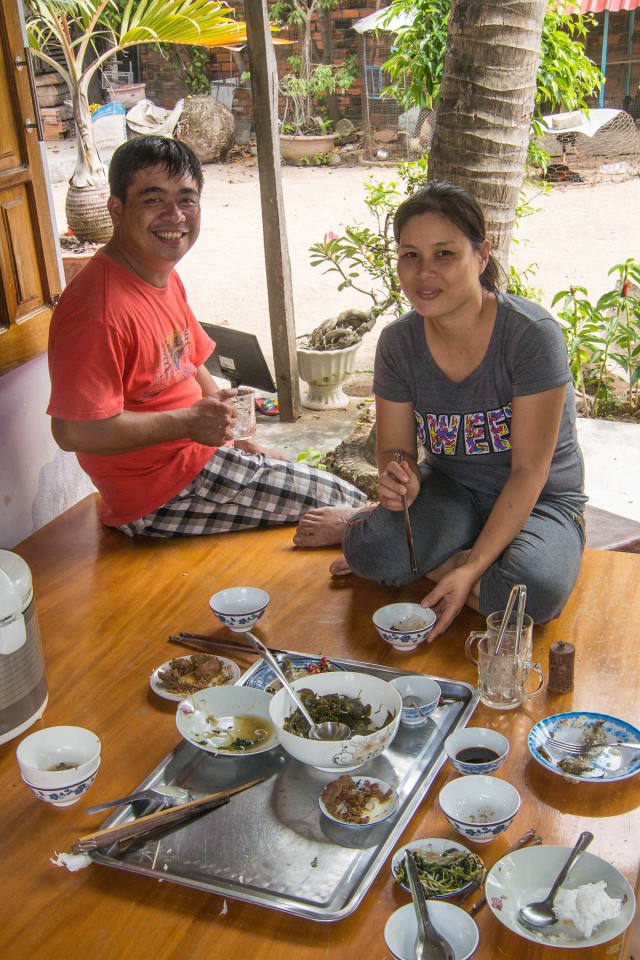 We then headed off to find a hotel, he on his road bike.  We found a place close by where I could shower, a nap and a body cool down.  At about 4:00 I picked up a six-pack and went back just as Dam was awakening from his nap.

By now Dam had worked out a two day itinerary for me.  I would meet his teaching colleagues that evening.  In the morning I would meet his bicycling group for coffee and then I would come to an important party he was hosting to honour both his daughter’s birthday and the end of the year, part of Tet Celebrations.  This would involve me spending two nights, but it sounded like a good idea to me.

We went on his motorbike to the teacher dinner.  It was held on the roof of the teacher dormitory.  There were about 20 people there.  The men sat at one table and the women and kids at another.  The beer flowed, with much toasting and filling each other’s glass.   Some of the men were spouses of female teachers, but still the segregation held.  One female teacher did join the men for toasting when the eating abated.  It did not last long and I staggered into bed by 9:00, well committed to the next day’s events.  I hoped there would be a little less beer.

Dam was supposed to come before 6:00, but as 6:30 approached I considered just heading out.  I am glad I didn’t.  He did arrive and we rode a few kms to where his group of about 15 men and one woman were sitting at little tables under a tree.  They had all sorts of morning drinks going.  I had Vietnamese coffee that I am getting very fond of.  Most had their road bikes here but some had come on motor bikes and cars.  They are a pretty affluent group by the looks of it.  One car was a shiny black Lexus.  After an hour or so Dam had to leave to begin working on his party.  Before I left the group they made sure that I knew the lady in the group was single and that she was a bike rider.  I didn’t get the impression that she wanted to head down the road tomorrow on her bike though. 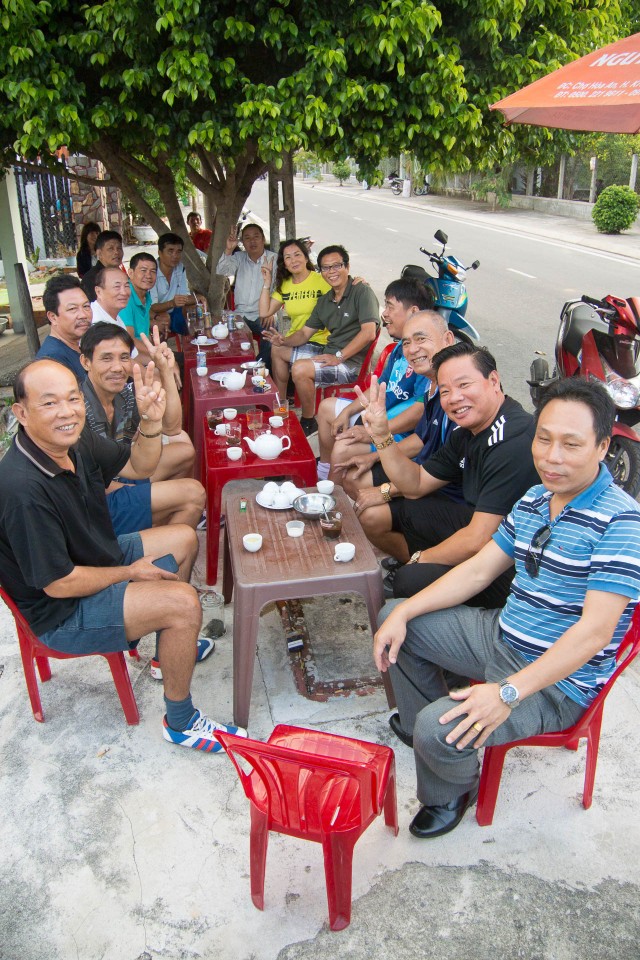 On my own I found the town lovely to ride around in.  I particularly enjoyed the waterfront with many good photo opportunities.  This is my sort of beach town.  No beach just a lot of boats and activity.  There were no tourists that I could pick out, but it is certainly the most photogenic place so far. 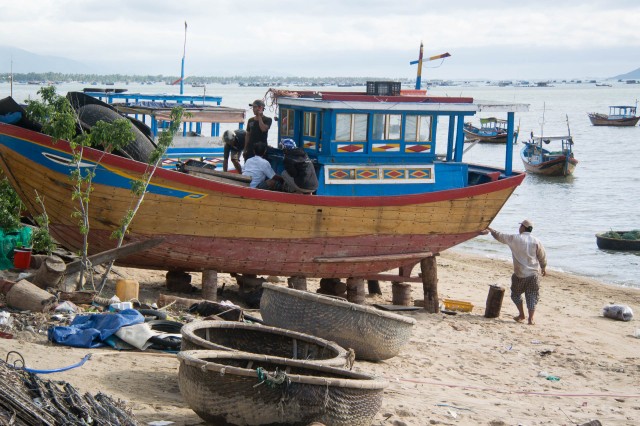 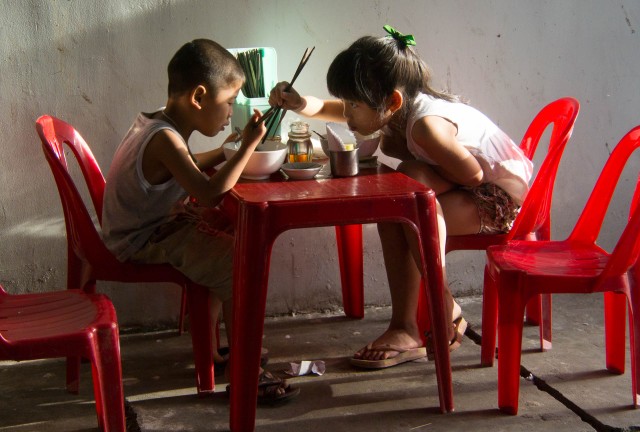 The party began at about 11:00 and about 20 people dribbled in over an hour.  The food was incredible.  The beer Heineken, which is served for special occasions.  We ate for a good hour and a half and had at least six different cold and hot plates.  The toasting and speeches non-stop.  Some of it even made sense to me.  This was a very special event and would have taken days of planning and preparation.  About four of the guests could make themselves understood in English and spent considerable time with me.  This was a very special event for me, one that I could not have hoped for when I came. 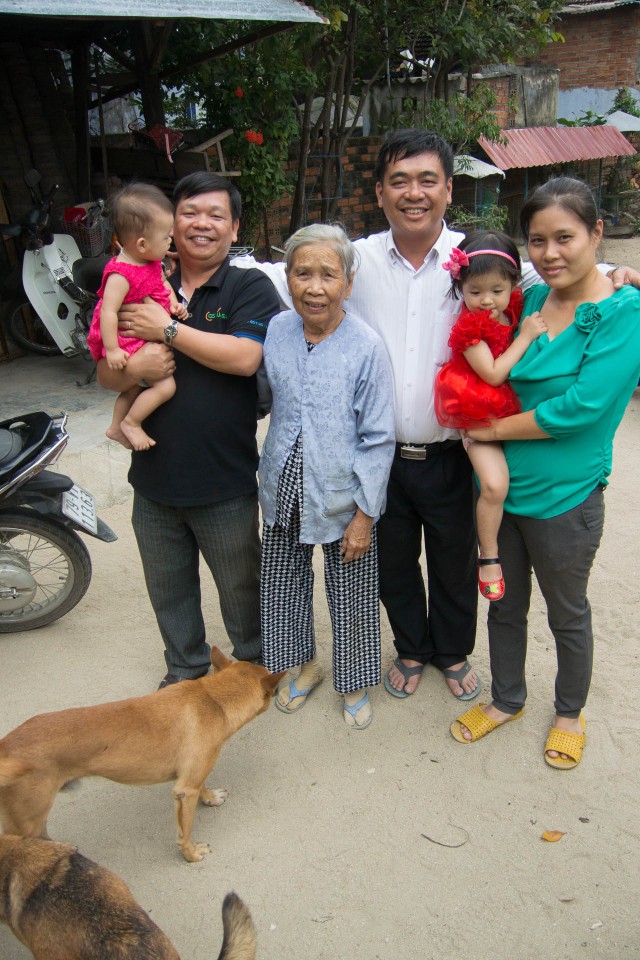 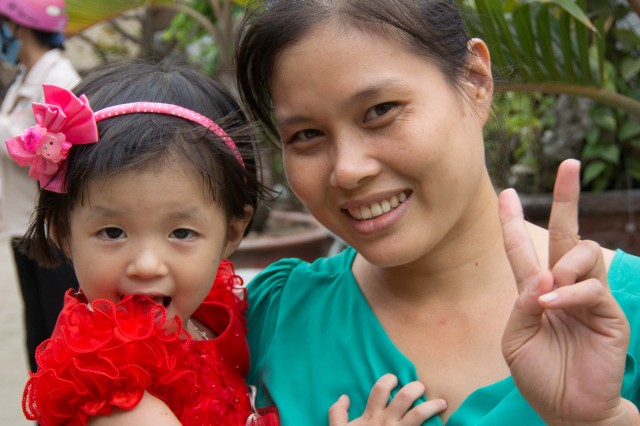 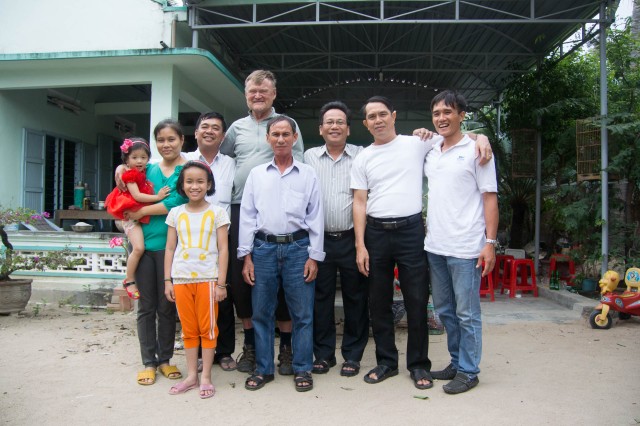 Odd man at the party 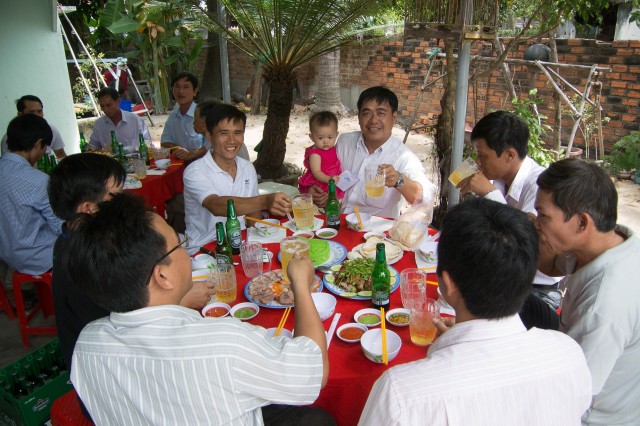 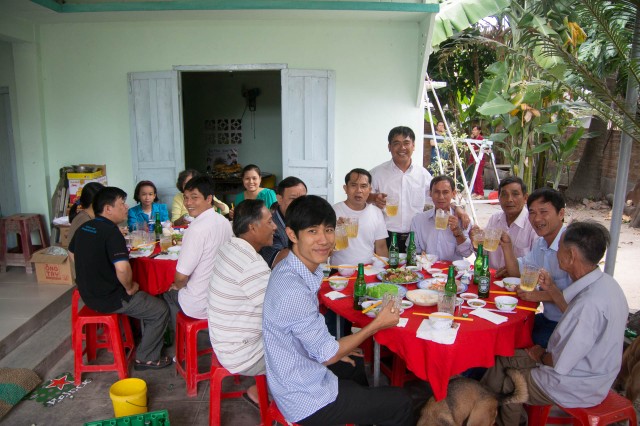 I spent the afternoon back in the AC room letting my body temperature come back to normal, but I had not nearly depleted my reserves like I do out on the road.

In the afternoon Dam came to pick me up again and we went and had more beer with one of his bike friends.  Phoom speaks English pretty well and so we could delve into a number of topics of interest to me.  We ate more at both Phoom and Dam’s places.

Away at 6:30 for what promised to be an easy day.  It was heavily overcast and so the heat never did hit.  I had Pho Bo on the road as usual, hit one small clilmb and then took a back way into Nha Trang.  It added about 8 km to my trip, but was a lovely quiet rollilng ride along the shore of a peninsula.  I stopped for coffee in Nha Trang about 9:30.

Nha Trang is considered Vietnam’s premier beach location and is one of the places I had planned on spending a couple of days.  These sort of tourist places are a break from the road style food, as good as it is.  I will also need to replenish my cash supplies as only a few banks ATMs work for me.

I am in a backpacker style hostel with lots of young kids, but I have my own room.

Sitting out on the beach in a high end restaurant I met Dam who had come in by bus to conduct some business.

Now I will kick back for a couple of days and plan the rest of my ride into HCMC.

I am a retired educator, computer professional. Now I like to travel the world by bicycle, on foot and periodically on skis
View all posts by kenmyhre →
This entry was posted in Vietnam. Bookmark the permalink.