The streets in the labyrinthine old quarter are no less confusing than I found them to be in 1995.  At least I have a decent map this time, but as the names change every couple of blocks it is often hard to find where you are.  Thankfully one of the benefits of the French occupation was a conversion, over a hundred years ago to Western script or I would have little chance of finding my way around.  The streets are much busier than the last time I was here, mostly because of the change from pedal bikes to motor bikes as the predominant transportation mode.  Walking about is a challenge because the sidewalks are basically useless for walking. Sidewalk use, in order of usage: parking for motor bikes, hot food outlets, display space for vendors of every conceivable item of interest.  The food outlets consist of a coal or propane stove surrounded almost always by half a dozen men and women sitting on tiny stools seeminly six inches high. Walking involves picking your way through the congestion, often out in the street where dodging the motor bikes is a 360 degree job as they may come at you from any direction.  It is all wonderful. 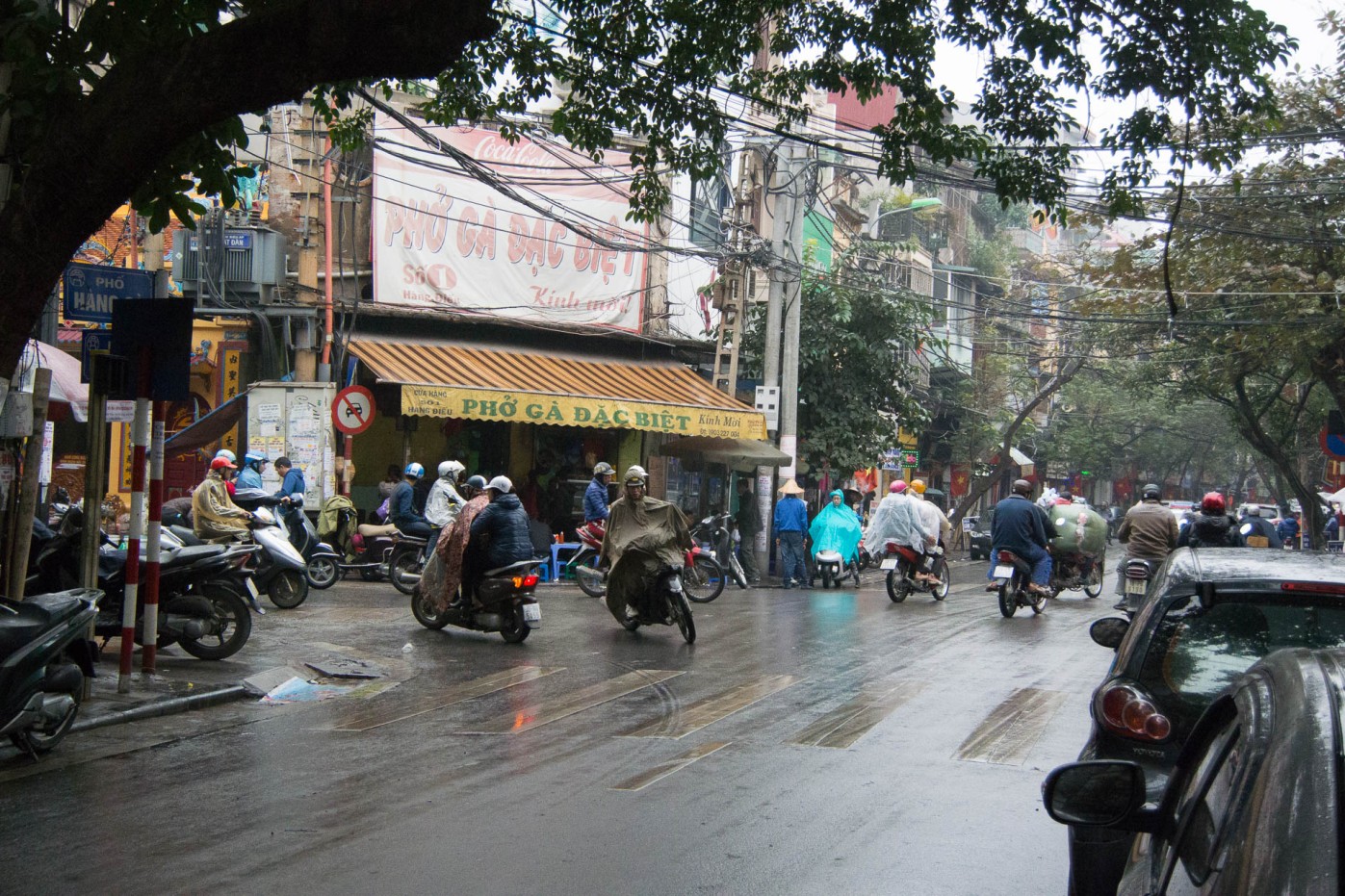 My plans have consolidated.  I will leave tomorrow by bike for Saigon.  I have given myself four weeks to get there.  Tam, my hotel host, one of a wonderful bunch of men and women working here at the Rendezvous Hotel advised postponing touring in this region until I come back.  She also booked my return train ticket.

I have kind of got used to being a multi-millionaire. I have already spent over 4 million Dong.  I have a good idea of the kind of food I will be eating.  I have had pho bo, bun bo and bun ga.  My drink of choice is bia.  I have been eating mostly at the second step up the food ladder.  There are countless eateries open to and spilling out on the streets.  Their stools are almost normal chair height, the big draw for me.

Today I rode my bike around, mostly to get used to the traffic rhythms but also to scout the road out of this city of 2.5 million and to visit a few of the attractions somewhat removed from my hotel. Yesterday on about five hours sleep after being awake for 40 hours I was in no condition to brave the streets on my bike.  Today it was fine.

Sadly, but to be expected, the Ao Dai has been relegated to special dress status for the women.  In 1995 I did see the odd woman cycling serenely along the road in her Ao Dai.  It remains one of my lasting memories from that short trip.  I have seen a few in Ao Dai thanks to couples posing for what might be wedding photos and then a whole group of high school girls on a photo outing.

I have visited a bit of the town, but will have a couple more chances when I return.  I have enjoyed walking Hoan Kiem Lake in the centre of town, visited the Temple of Literature, a 1000 year old Confucian Temple and Hanoi’s first institute of higher learning.  I have had a brief visit to their History museum.

My first day it was drizzly all day and I worried about my equipment.  Today it was nice, not too hot and not too cold and so I feel good about heading out tomorrow.

I am a retired educator, computer professional. Now I like to travel the world by bicycle, on foot and periodically on skis
View all posts by kenmyhre →
This entry was posted in Uncategorized. Bookmark the permalink.