It was late in the day by the time we got the ferry from Kangaroo Island to Cape Jervis.  We gassed the van and headed off down the road, not sure where we would find a Caravan Park.  We drove for a few hours, through a few towns before finally getting into a pretty nice park, We were late, but they had a late entry approach.  In the morning we saw a new parrot, after a flock of them woke us in the morning with the normal raucous parrot calls.

We continued on south in poor weather.  Our stop at Coorong Pk was brief, yielding only a nice walk.  This park is a 100 km long sand spit separated from the shore by a thin salt water lagoon. It would be a nice wildlife place in nicer weather, but on we went.  We stayed by a “footie” (Aussie Rules) oval in a tiny town and supplied some entertainment for the locals by turning up in the bar for pizza and beer.  We may have been the first outsiders for all we know.

As we hit the southern coast our old van quit giving us AC, or speedometer info, or signal lights or window controls.  It seemed to me to be a fuse problem, but could not find the right fuse location among the four.  Built into the van rental is road service and they arrived after about an hour to replace the proper fuse and to leave some extra replacements.  As we rolled into the Caravan Park at Port Fairy it failed again.  Road service came again but would not attempt to find the problem.  That night and the next morning 4 more bunt fuses got us down the road a bit to where our agency had booked a service for us.  They found the cause, but did not have the appropriate part.  They disconnected the back up lights, the culprit, and although illegal we were able to progress onto the Great Ocean Road without the loss of any other function.

We drove most of the length of the Great Ocean Road that afternoon, stopping a few times the most notable at the 12 Apostles attraction.  These are twelve (I assume) pillars in the ocean that have been created from the sandstone banks by the pounding surf.  It is high on the list of must sees in Australia.  And for the first time on this trip we joined a throng of people making their way through the bush from a parking lot with hundreds of cars and numerous tour buses.  Most of the tourists were oriental of all ages, many armed with the extendable arm to hold cell phones for selfies.  We slalomed through the selfie crowd to the two or three vantage points to add our photos to the thousands taken hourly.  The late sun created a pleasing affect, almost lifting our spirits beyond the crowd.

The road is truly incredible, in and out of the bays cutting into the clifs rising high above us, which of course makes the progress very slow.  Late in the day, at Lorne, we stopped in a caravan park where we were checked in by a New Zealand Maori.  He happily directed us to “The Pier” with the directions to tell them Packie sent us.  We had a great seafood medley.

In the morning we finished off the GOR drive and stopped for two more hours to get the part for our van installed and then turned away from the ocean and headed towards Melbourne.  We stopped at one birding site, which was devoid of birds and then went to the #2 site in our 100 best birding sites book.  It was described in our book as the Werribee Sewage Farm.  How about that as an attractive heading for one of the key destinations on a holiday.  We went into the headquarters for the Melbourne waste water treatment facility, had wonderfully cheerful service getting a permit complete with gate key to enter the treatment fields.  It was about 2:00 pm on a Thursday and the lady felt it was a bit late to get the key back today so she gave us until Monday to return the key.  A $50 deposit ensured the return.  We went and had a look, saw 100s of birds, including a few new species one of which was the Wedg-tailied Eagle, or wedgie as it is familiarly referred to here.  It is the largest flighted Aussie bird.  We did not have near enough time  and so on the spot modified our forward plans to include a return trip.

It was about 50 more km to Melbourne and the Caravan Park we had chosen to be our home for the next three nights.  We fought our way for two or more hours through Melbourne rush hour to the Park.  Thank goodness for GPS.  I phoned Peter Reichenbach and agreed to meet the next night.

In the morning we bussed about 16 miles into central Melbourne and each went our way in town.  This will be our main mid-trip city visit and we each have our own preferences.  I mostly walked the streets, often on one of the planned street walks that I picked up at a very comprehensive Information Centre.  There are some nice old historical buildings and some good bookstores.  I also had a nice Thai lunch.  Nice afternoon.

We drove again by GPS to have dinner with Peter and Helen and talked mostly rugby and old friends.  They took us to the local RSC, returning soldiers club, or something of that sort.  It is like our legions.  We had a nice traditional dinner and more talk.  It was raining and we had to return the 10 km by GPS in the dark.  Pretty tough on an old one-eyed driver, but I think even tougher for an older back-seat driver armed with an unfamiliar GPS.

Saturday began rainy and so we set off late for our day in town.  We had thoughts of seeing a live footy game but there was too many conflicting interests that we each have.  Again we went our own ways.  I did the Melbourne Museum, and walked a lot.  I went by the Melbourne Cricket Grounds as the footie fans were flooding in.  Possibly up to 100,000.  By then it was sunny and I was tempted to go in, but I wanted to keep walking; the Rod Laver Tennis stadium where the Aussie open is held, the lovely Melbourne Botanical Gardens and on through a bit more of the city to the state Library.  Good day.

Our three days in Melbourne were a nice change from the all day driving, but tomorrow we are off again for the final phase of our grand Aussie Adventure. 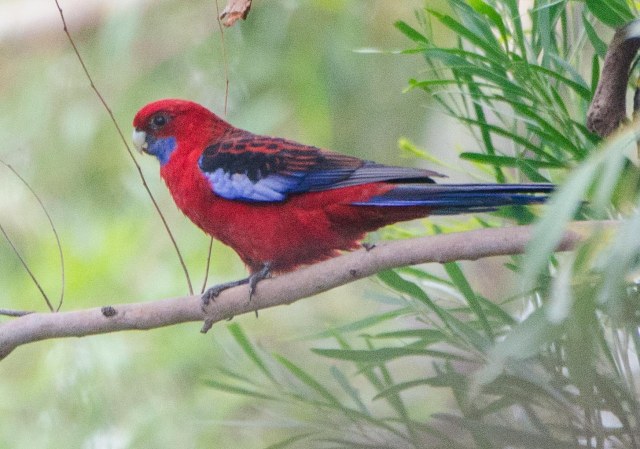 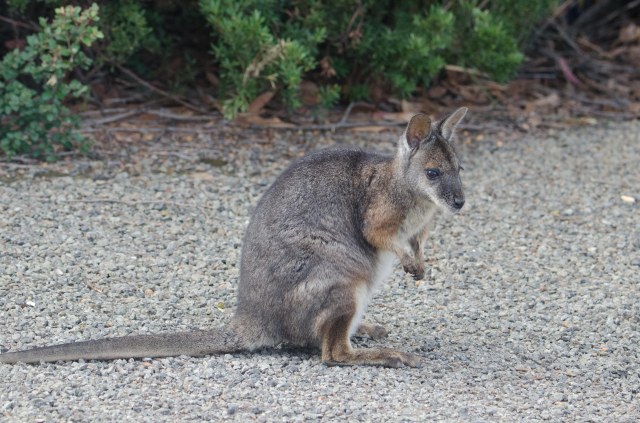 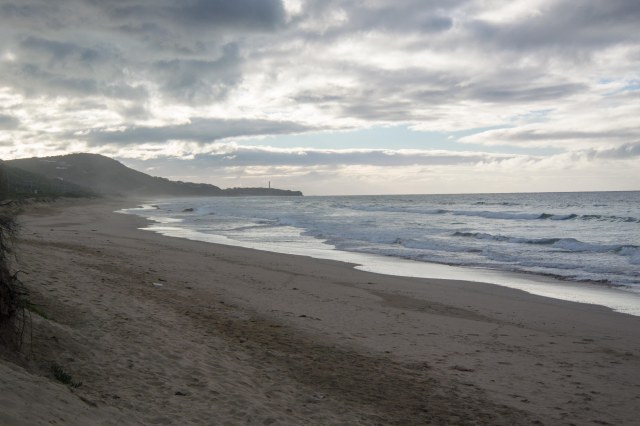 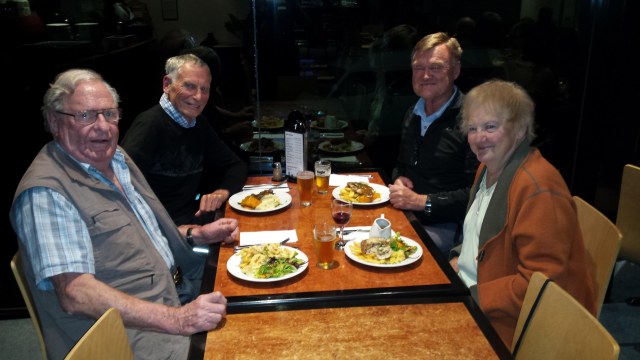 Dinner with Peter and Helen 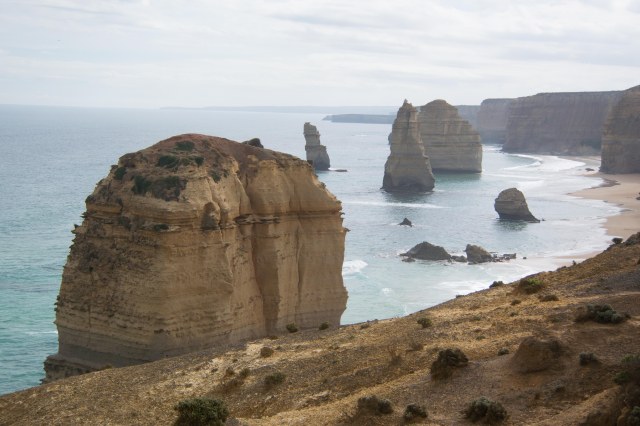 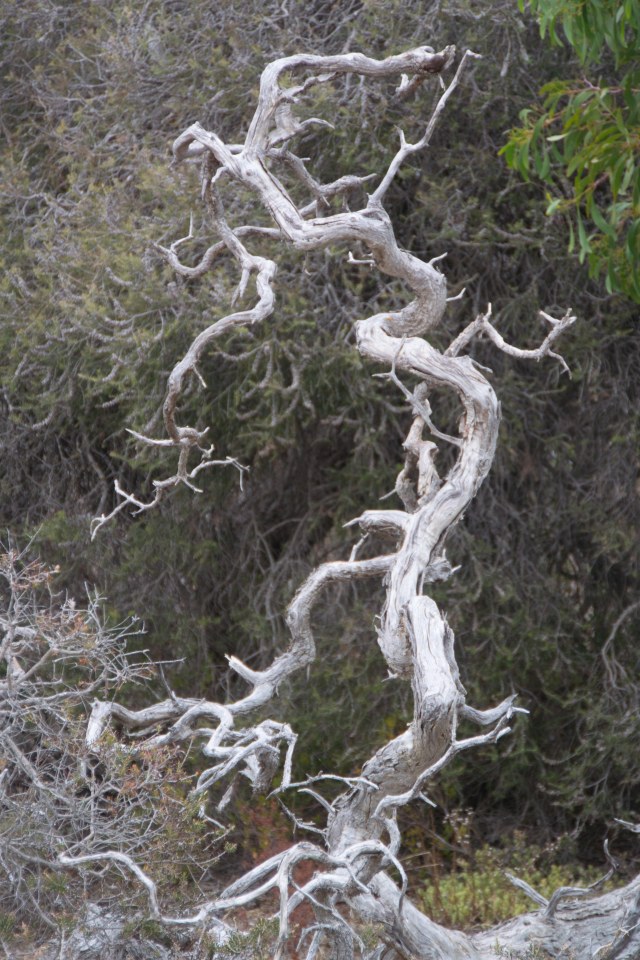 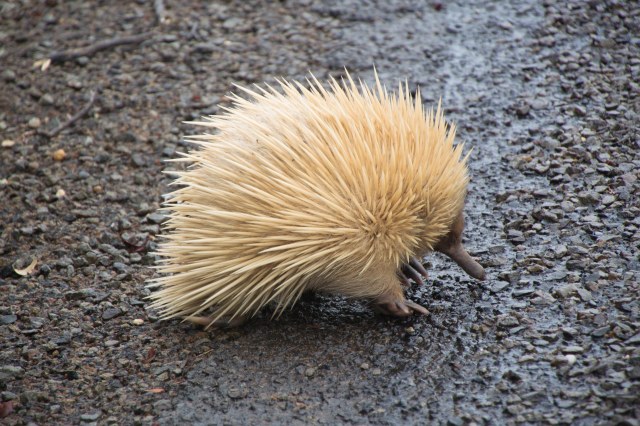 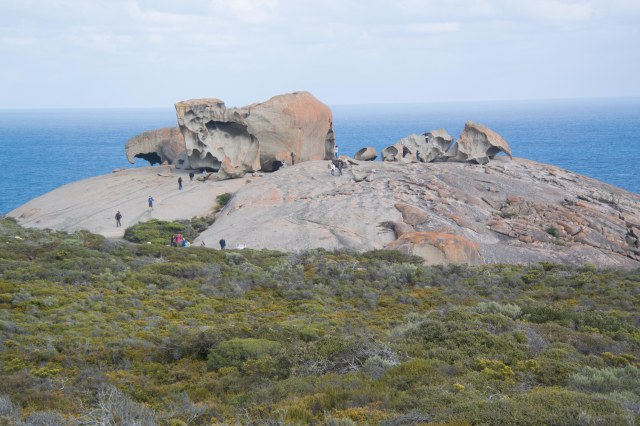 The Remarkables on Kangaroo Island

I am a retired educator, computer professional. Now I like to travel the world by bicycle, on foot and periodically on skis
View all posts by kenmyhre →
This entry was posted in Australia. Bookmark the permalink.

1 Response to On to Melbourne