We had a nice breakfast at the hotel and then walked down the street to a RDTC hotel where we booked an all day Jaipur tour. More than I wanted, but we missed the half day tour. Rich and I were the first to board our full sized bus and we took our assigned last row seats. After a couple of more stops the bus was full and off we went. Our guide was good enough to speak English, basically to us and a Japanese couple. The Indians hopefully understood as well.

We visited three forts, including the most famous Amber Palace late in the day.

We visited the City Palace and Jantar Mantar, a wonderful astrological park , filled with huge sun dials of various designs, instruments to predict the location of the planets and things. We must have seen all of the main city attractions and we did not get back until close to 8:00 pm, much too much for me, but is was enjoyable seeing all the great things here. I was impressed by the dedication illustrated by the less privileged in their long lines to get into the temple at the Amber Palace to honour the last days of Diwali. It was fun watching the monkeys cavorting, and crawling around the palace walls with them.

We had good meals on the roof top of our hotel on both nights in town. Our train back to Sawai cost us 1300 R each, for first class AC, coming it was 50 R each for rush where we horned in on a second class train. As the train left at night we had all day in Jaipur. I went back into the old town to visit the Hama Mahal, one of the attractions on my ticket we did not use yesterday, and Jaipur’s most famous landmark. We also ate a very good vegetarian restaurant called LMB, that has attracted locals and tourists alike since 1954.

Jaipur is certainly the nicest city I have been in in India so far. There is still lots of hectic traffic, but also some places which are not so bad. The architecture though, is what is most attractive. There is a salmon colour to many of the buildings in the old town, and the ornate domes and pillars that are seen in the palaces and forts appear often in small buildings around the town. There are still no end of touts selling everything and the tuk-tuk drivers like to drive a hard bargain, but that is part of things here so we live with it.

Our two hour train ride put us back in Sawai at 7:15 and we checked back into the hotel where we had left our bikes and bags. We have been talking about taking a big jump south on a train. The small station of Sawai should be easy to book at and to get our bikes arranged. We are so leery of the road quality and the hassle of getting on trains makes it hard to use trains to get us out of trouble, so hence if we do a big jump, possibly we can stay on our bikes until it is time to get back to Delhi.

A railway agent at the station in Jaipur gave us an idea for getting to Mumbai. Tomorrow we will try that.

After breakfast we headed down to the station which was pretty peaceful. Naturally the suggestion the agent in Jaipur made didn’t work. Instead of getting 1st class AC, we are wait listed on 3rd class AC, on a different train. We feel that is a pretty good possibility, but it will be a rough 16 hours. A small possibility exists that we can upgrade while on the train. So we hang around for a while and then I will go back to attempt to get moved off of the wait list and then hopefully we can go back to get our bikes booked on.

Our efforts at getting our bikes on our train were only partially successful. We had no trouble with lines or communicating but our agent suggested that our bikes might take three days to get to Mumbai, and that it was only a 50% chance that it would be on our train. We made our bookings and headed towards the platform our train would arrive at. We still had an hour to wait.

As the departure time came closer we saw our bikes being rolled towards where we hoped the baggage car would be and signs began to appear which put us close to where our car would stop. There are about 30 cars in a train like this.

We were very pleasantly surprised with our seats. We had the two lower bunks in a three level bunk cubicle and the car was pretty new. We also had no bunk mates when we boarded. And the train was pretty fast. No stops in the first hour. 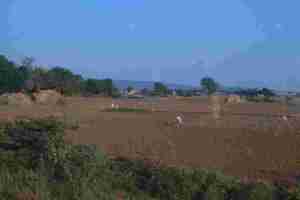 We watched the country side slip by for a while and then pulled the curtains, turned out the lights, pulled down some sheets and were soon sleeping to the restful sway of our car as it headed into the night.

Around an hour into our dreams the curtains were pulled open, the light turned on and a family of about 8 began to settle in, first with bags and then with assigning bunks and with eating. The mother handed out food to everyone and finally the father made up bunks; our compartment was now full of 6 people with 2 more across the hall, and a couple hours after their arrival our fitful sleep was allowed to continue.

We finally pulled into Mumbai Central, at 7:30 am, 15 hours after departing Sawai, pretty fast for the 1000 km journey. I went down to the baggage car and could not find our bikes, was taken in tow and lead to the front of the train where there were more baggage cars; still no bike. At this point an elderly man took control, and we went to his office and he began phoning. At first it looked like our bikes might come on a later train, but finally they were found. We had tea and chatted for an hour until they turned up. Rich’s bike was scrunched a bit, but my front wheel was bent and I had to operate once we were established in our room. This was the first time our bikes were buggered on the train.

We had about 5 km to cycle to our booked room 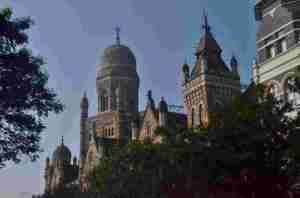 , the YWCA, where we spent two nights. I cycled and Rich walked/cabbed about and we had a brief visit of some of the highlights of this old colonial bastion. I liked it much more than I had expected, mostly the ornate old buildings from the British Raj days, but also the coffee houses, a fine museum and the fairly reason able traffic. At any rate, our city respite is close to being over and I am looking forward to setting out on our bikes again in the morning.

I am a retired educator, computer professional. Now I like to travel the world by bicycle, on foot and periodically on skis
View all posts by kenmyhre →
This entry was posted in KKH&India and tagged India, Jaipur, Mumbai, Train Travel. Bookmark the permalink.