We had an lazy morning in Wagah as the border did not open until 9:30, and then it took close to an hour to make our way through the multiple checks on both sides, but it was not busy and every one was interested in these two old guys on bikes, so it went pretty well.

The 32 km ride from there in was pretty nice, starting with an empty 4 lane road. I may be wrong, but on the maps it looks like this is the only significant border connection between Pakistan and India. Pity, given the long history together and the need for them to get together. My GPS is now working, and it took us nicely along the streets of Amritsar to the hotel that we had picked out, and it worked out fine. The very first thing we did was have a picture of cold beer in the courtyard garden cafe.

After settling in and relaxing for a while we took a tuk-tuk to the Golden Temple, the main temple for the Sikh religion. We took our shoes off and donned a headscarf, walked through a cleansing pool and entered a large courtyard, surrounded by white marble buildings, onto a patterned while marble walkway. People were walking peacefully or sitting and observing the main point of interest. 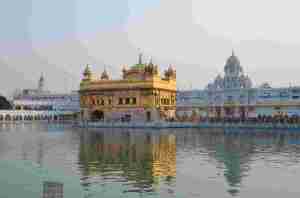 The Golden Temple sits in the middle of a pool and so it rises above its reflection from all sides. Most of the temple has been coated in gold, over its 450 year existence, 750 kg our books say. In the walk around the outside people stop and say prayers at inscribed dedication stones, or at alcoves where a holy man might be reading from Sikh scriptures.

People were bathing in the water, drinking it or buying it to take away. It is interesting how water, in many religions is seen as purifying or curative.

We cued up to walk the causeway that brought us into the temple where there were more holy men, chanters and people playing instruments including an unusual accordion. We had to keep on walking out the door in the queue. The gentle music we heard in the temple was piped into the courtyard and followed around as our walk continued.

Obviously the majority people here were Sikhs and we were able to observe the full range of colourful apparel and styles for all ages. No one hassled us to buy things and so it was quite a moving experience; one of the better ones at religious centres.

The night walk back to the hotel was nice, through the old town and markets until it came time cross the rail tracks and the busy roads around the station, Not much fun as you have to thread your way through the cars and motor bikes that do tend to weave around you, but can you trust them to see and to avoid you.

We walked to a park and visited a museum, dedicated to Maharaja Ranjit Singh, the same guy who gilded the Golden Temple. The temple illustrates, using colourful dioramas, Ranjit’s battles which wrested much of the area around Lahore and Amritsar from the Moghuls. We went thinking the museum could have been tacky, but it was not.

As the area from here down through Delhi to Agra is very busy, possibly hot and tedious and because we are both a bit under the weather we had decided to fast track our trip to the south by taking trains as far as Agra. If think that if it sounds like rationalization it usually is. So we went and stood in lines at the Train Station for the next number of hours, and I began to wilt, seriously. After some time I could no longer stand up for more than a few minutes and on our walk back to the hotel I could not keep a continuous walk. At the hotel Rich, I was now in his hands, asked about a doctor. We were sent to doctor in his clinic and he did some diagnosis. Not too hard I guess. I was completely de-hydrated from the diarrhoea, and all of my body indicators were off. He prescribed a bunch of stuff and was sending us out when I almost toppled over. It took him no time to decide to send us to a hospital down the street.

I spent the next 30 hours there most of that in emergency. They had me on intravenous the whole time getting drugs into me and getting my electrolytes back to normal.

Other than my problems and what it might mean for our trip, after they reduced my agony I thoroughly enjoyed the Emergency Room experience. I was able to watch a very effective medical system, had no end of the staff stopping to visit with me, when they had a moment. I found them all of them delightful and helpful. During my stay in emergency I watched the team work on three different victims of some mishap or other and was impressed by the work they did. An interesting aside was the way they so skillfully let the concerned family members in at first and then gradually ushered them out and then locked the door as the work got serious. In our world we would be much more brusque when the serious work had to be done.

A highlight for me was the many good conversations I had with a young nurse, Sandeep, who had earned a scholarship that brought her from her small village to an English language school, and then on to Bachelors and Masters degrees in Nursing. She has now applied for a PhD program in Toronto. She was on duty in emergency while I was there. In fact she worked 14 hours that night, and so she did much of the work on me. I began to learn how to get her to do the little head wag the Indians do so endearingly. It might mean yes or no, or possibly or we will see or just about anything.

“Sandeep, will that lady they brought in earlier be all right?”

Smile, head wiggle, no discernible verbal response. Possibly in this case it means “as god wills”, as the muslims would say. No doubt you need to grow up with it to fully understand. It didn’t matter to me, When a pretty young thing smiles and waggles her head at me it makes me happy no matter what it means.

They must have pumped a gallon of medicine and salts into me, and it brought my body measurements back in order, but I will have to admit I cheated a bit on the diarrhoea, lying to them about how fast it was clearing up. Rich had changed our train departure to the next day and I had to get out, so I left without clearing out the offending beasties. Hopefully the medication our good doctor put me on will complete the job. I am still having emergency little dribbles that I have to watch very closely, and am concerned about getting it cleared up.

We had to be up at 3:30 am to be ready to deposit our bikes in the baggage area of the train and make our way onto our car for the 5:45 departure. It is a pretty basic sleeper car, with no AC. We had been assigned seats and had room to strech out across a bench that had four seat numbers marked above. We travelled with the windows open for about 8 hours to go less than 400 km, stopping countless times. 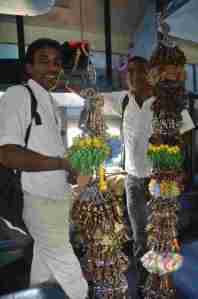 We were entertained by a continuous stream of vendors selling everything from food and drink to trinkets of all sorts. Beggars were also numerous and they included children, often maimed, gypsy types, ostensibly from Rajasthan and transvestites, to provide us with the continuous reminder of how strange this country is. By the time the train got to Delhi people were all over the place with as many as eight sitting in the four seats. The only exception was our seat as they mostly left us alone, except for the odd intrepid traveller who would sit with us for a while, talk a bit, possibly offer a bit of food, and then move on.

We arrived at 2:00, found a very nice hotel near the station, where we will leave some things while we go south and return to for our flight home in December. We also outfitted ourselves with cells, me with a sim card, Rich with his very first cell phone. Tomorrow we will get ready to take another train leg to Agra and the Taj Mahal. We will leave our tourist visit of Delhi until we return at the end of November.

I am a retired educator, computer professional. Now I like to travel the world by bicycle, on foot and periodically on skis
View all posts by kenmyhre →
This entry was posted in KKH&India and tagged India, Islamabad. Bookmark the permalink.